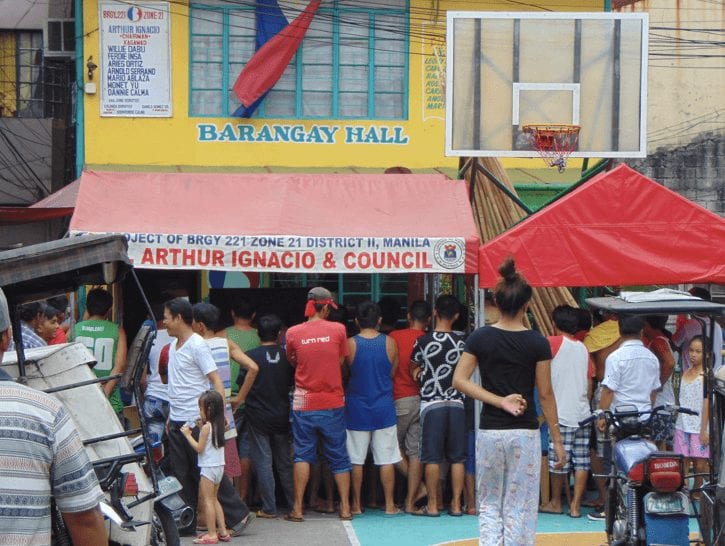 An overflow crowd of residents from Tondo, the most dangerous slums in the Philippines, catch of glimpse of their hero, Manny Pacquiao, as he takes on Floyd Mayweather in the Fight of the Century.

In A Requiem For a Nun, the great American author William Faulkner once wrote, “The past is never dead. It’s not even past”. To me, it just feels like yesterday, but three years ago this month, I traveled to the most dangerous slums in the Philippines called Tondo to watch the Fight of the Century, Floyd Mayweather vs Manny Pacquiao. I wrote about my experience in Tondo, which for a moment turned into a zone of tranquility. It was a night and day contrast from the usual wretchedness that plagues life in any slum, let alone the most notorious slums in the Philippines. Today I am republishing my article that was originally published on May 9, 2015.

Manny Pacquiao is said to posses super powers that no other human being can match.

When Pacquiao fights, most often from an ocean away, his homeland, the Philippines, experiences a surreal level of tranquility and stability. Pacquiao, who holds public office in the Philippines, has previously (albeit temporarily) suspended an Islamic insurgency, reduced the national crime rate to zero, and eliminated congestion from Manila’s traffic plagued streets just by stepping into the boxing ring. He is frequently mentioned in the media as a legitimate future Presidential candidate, and the biggest fight of his life was not Saturday night’s “Fight of the Century” against undisputed pound for pound world champion Floyd Mayweather, but rather against the widespread poverty that continues to cripple the Philippines. So he says.

Pacquiao’s popularity in the Philippines cannot be disputed. Leading up to his fight against Mayweather, Pacquiao merchandise had been “flying off shelves”. On May 1, an editorial published by the largest newspaper in the Philippines, the Philippine Daily Inquirer, urged Filipinos to pray for Manny Pacquiao’s success. The night before the fight, the evening mass at Immaculate Conception Parish in Manila’s Tondo district accommodated an overflow crowd. Tondo, which is the Philippines largest congressional district, is notorious for abject poverty, crime, and slums. Michael Jordan Castillo, the 26-year-old elected chairman of one of Tondo’s many precincts or barangays, predicted that a Manny Pacquiao victory would bring about an unprecedented level of happiness.

Yet while Pacquiao is perhaps the most popular person in the Philippines, his vow to fight poverty raises major doubt to the people who need the most help. Every resident of Tondo I talked to said they would support Pacquiao against Mayweather, however their support for Pacquiao the part time politician was tepid at best. “Manny is a great boxer, but he has not proven himself to be a great politician”, said fifty-six-year-old Tondo resident Nora Alfonso. Boy Rodriguez, a forty-two-year-old barangay chairman downplayed the social significance of the Mayweather v. Pacquiao fight, saying, “[When Manny Pacquiao fights, it] will be a national holiday and crime and drug usage will fall to zero. But on May 4, drug users will continue their habits”. Another barangay is set to be demolished later this month. It’s residents will be uncompensated, and forgotten. Annalin Romero, a twenty-nine-year-old lifelong resident of this barangay had a message for Manny Pacquiao: “If there is one thing I would ask of Manny Pacquiao, is if [he] could stop the demolishment of my home”.

Yet while Pacquiao is perhaps the most popular person in the Philippines, his vow to fight poverty raises major doubt to the people who need the most help.

Many residents of Tondo’s barangays expressed their appreciation for Manny Pacquiao’s rags to riches story. However, not one person in Tondo that I spoke with expressed any vision of hope in their own lives from Manny Pacquiao’s life story. “Manny became rich because he was a professional boxer. We don’t have boxing here because it is too dangerous. We play basketball as a hobby to escape the drugs”, said Bernardo Sanding, 31. 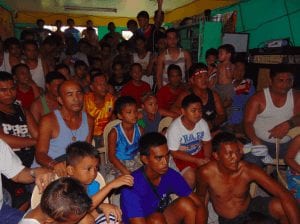 Residents of Manila’s most infamous slum, Tondo, collectively watch their hero Manny Pacquiao take on Floyd Mayweather in the Fight of the Century

On the morning of the fight, Immaculate Conception was again filled to capacity. In the hours leading up to the fight, the buzz in the Tondo air was apparent. Many of Tondo’s barangays were preparing big screen televisions to screen the fight. Several people on the streets wore red “Go Manny” head bands to show their support. Interestingly enough, there was an unusually disproportionate amount of women in the streets running Sunday errands and socializing. “Men watch the fight, and women shop”, joked storekeeper Carolina Armas. “I want you to ask [my sister] Vivian(who co-runs the shop) if we are going to close for the fight”, Armas continued. Vivian, 67, smiled wryly and simply said “no”.

Approximately three hundred men, boys, and just a handful of women packed the headquarters of Tondo’s Barangay 221 and the adjacent basketball court accommodating the overflow of viewers. Those watching inside were literally punching the low ceiling with every effective shot that Manny Pacquiao landed on Floyd Mayweather (especially in round 4), and the trance like mantra “Manny, Manny, Manny” seemed to suspend time itself. As the fight wore on into the championship rounds, the chants subsided and reality had begun to manifest. When the fight ended, the eerie silence of the crowd said it all: Manny Pacquiao had lost the fight. While the entire crowd remained to hear the decision, the crowd quickly dispersed to go about their normal lives after Mayweather had officially won. Only a handful of people remained to listen to Manny Pacquiao’s post fight interview. Just minutes after the fight, there fell from the heavens a monsoon like downpour as if the tears of God were baptizing his beleaguered children. “We Filipinos are a superstitious people”, contemplated one Tondo resident as the heavy rain fell.

For one hour, perhaps Manny Pacquiao offered the people of Tondo a bit of catharsis for the beleaguered Philippines.

What, in the end, did the “Fight of the Century” mean to Tondo’s residents? For one hour, perhaps Manny Pacquiao offered the people of Tondo a bit of catharsis for the beleaguered Philippines. Every cheer that the Tondo crowd released as Manny Pacquiao violently swung at Floyd Mayweather provides proof that even in a loss, the pain of experiencing everyday life in crippling poverty was momentarily lifted by a sacrificial goat. “Even if I hurt myself…even if my heart aches…I will fight the whole world for my country bringing glory to your name…I will fight the world with my life at stake. I will fight for all Filipinos”, Pacquiao sang in his native tongue as he entered the ring.

While chances are that Pacquiao did indeed exercise his superhuman powers to bring peace and tranquility to his homeland from 7,300 miles away, and it was prolonged by the hour long rain storm, this surreal reality was short lived. Within minutes after the fight, the atmosphere around Tondo felt as if the fight never happened. Children were running in the rain soaked streets and dribbling basketballs as adults went back to their mundane reality of everyday life. “The Philippines would not be any better or worse had Manny Pacquiao never existed”, quipped storekeeper Carolina Armas. “Life goes on”, deadpanned 27-year-old Julius Jacob as he boarded a tricycle to get back to work. 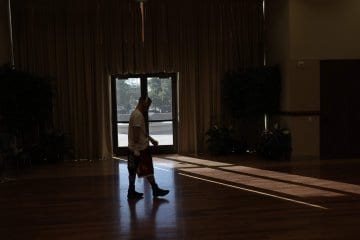