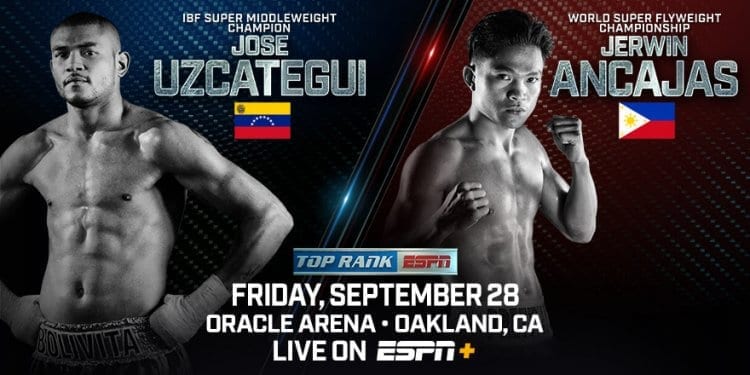 IBF super middleweight champion José Uzcátegui, the power-punching boogeyman of the 168-pounders, will face Ezequiel Maderna in the 10-round, non-title main event on Friday, Sept. 28 at the Oracle Arena in Oakland, California.

And, in the co-feature, Jerwin Ancajas, the world’s longest-reigning 115-pound world champion, is ready to add another defense to his résumé. The southpaw Filipino sensation will make the sixth defense of his IBF junior bantamweight world title against the hard-charging Alejandro Santiago.

Ancajas-Santiago and Uzcátegui-Maderna will stream live in the United States beginning at 10:30 p.m. ET on ESPN+ — the new multi-sport, direct-to-consumer subscription streaming service from The Walt Disney Company’s Direct-to-Consumer & International segment in conjunction with ESPN.

The undercard will stream on ESPN+ beginning at 7:30 p.m. ET and includes a matchup of former 122-pound world champions: Jessie Magdaleno will take on Rico Ramos in a 10-round featherweight bout. Also appearing on the ESPN+ broadcast will be 118-pound contender Joshua Greer Jr. (17-1-1, 9 KOs) making his Top Rank debut in a 10-rounder against Giovanni Delgado (16-7, 9 KOs); the return of Filipino featherweight contender Genesis Servania (31-1, 14 KOs); and 18-year-old featherweight sensation Christopher Zavala (1-0) in a four-rounder.

Promoted by Top Rank, in association with MP Promotions and Zanfer Promotions, tickets for this all-action card go on sale Wednesday, Aug. 29 at 10 a.m. PST. Priced at $105, $78.75, $52.50, and $26.25, including facility fees, tickets can be purchased online at Ticketmaster.com or at the Oracle Arena box office. The Oracle Arena box office is open Monday-Friday from 12-5 p.m.

“This is my first fight since winning the world title, and I will be representing my country and my beloved Tijuana, Mexico, with pride and guts,” Uzcátegui said. “I will show the world and my opponent why I’m the best super middleweight in the world right now!”

“I am very excited to defend my title in Oakland in front of the great fans there, and I look forward to a great challenge from Santiago,” Ancajas said. “There is a large Filipino community in Northern California, so I expect an incredible atmosphere inside the Oracle Arena. I also want to thank MP Promotions, Sean Gibbons, Top Rank, and Mr. Bob Arum for this opportunity.”

“I want to be a world champion again. I have that fire and that fuel, and I am ready to do whatever it takes to get back there,” Madgaleno said. “I have new trainers, Ismael Salas and Jorge Capetillo, and I feel like it’s been a great move. I feel like I Iacked movement in my last fight, and I felt like I needed to get back to the way I was when I won the world title against Nonito Donaire. Everyone will see a renewed Jessie Magdaleno when I fight Rico Ramos.”

Uzcátegui (27-2, 23 KOs) is coming off the biggest win of his career, an eighth-round stoppage against former world champion Andre Dirrell on March 3. It was a rematch of a controversial 2017 disqualification defeat for Uzcátegui, who was ruled to have knocked out Dirrell after the bell had sounded to end the eighth round. The win over Dirrell earned Uzcátegui the IBF interim title, but he was elevated to full champion after then-champion James DeGale elected to vacate the belt rather than face Uzcátegui. A native of El Vigia, Venezuela, Uzcátegui’s last 10 wins have come via stoppage. Maderna (26-4, 16 KOs), from Buenos Aires, Argentina, turned pro in 2008 and has won three of his past four fights.

Ancajas (28-1-1, 19 KOs) from Barangay Ramirez, Magallanes, Cavite, Philippines, is a southpaw power puncher who has been a world champion since Sept. 3, 2016, when he knocked down McJoe Arroyo in the eighth round en route to a unanimous decision victory. He is one of boxing’s most active champions, having defended his title three times in 2017 and twice in 2018. In his last bout, May 26 at the Save Mart Center in Fresno, California, Ancajas defeated countryman Jonas Sultan via unanimous decision in the first all-Filipino world title bout since 1925. Ancajas is 16-0 with 14 knockouts since his only loss, a 10-round majority decision to Mark Geraldo on March 17, 2012.

Santiago (16-2-4, 7 KOs), a native of Tijuana, Mexico, is riding an 11-bout unbeaten streak dating back to August 2015. He last fought on March 14 in Ponce, Puerto Rico, battling to a spirited draw versus Jose Martinez for the NABO super flyweight title.

Magdaleno (25-1, 18 KOs) is a former WBO junior featherweight world champion who lost the belt in one of the best fights of 2018. On April 28 in Philadelphia, he knocked down Isaac Dogboe in the first round, but Dogboe rallied to score three knockdowns of his own and knock Magdaleno out in the 11th round of an instant classic. Ramos (29-5, 14 KOs), is a 10-year pro, won the WBA 122-pound title with a shocking, one-punch left hook knockout against Akifumi Shimoda in 2011, but lost the title in his first defense against then-unbeaten Guillermo Rigondeaux on Jan. 20, 2012 in Las Vegas. Ramos has won five in a row since a third-round KO loss against Claudio Marrero in July 2015.