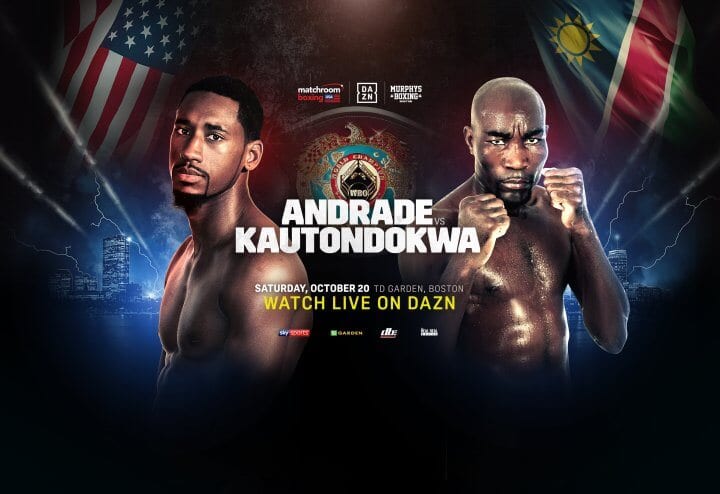 Just one day after WBO middleweight world champion, Billy Joe Saunders was denied a license after a failed pre-fight VADA test, Demetrius Andrade now has a dancing partner for October 20th in Boston, Mass, and that man is Walter Kautondokwa.

Saunders, who had several unlikable incidents prior to being denied a license in Massachutes, including impersonating a cop and humiliating a man as well as mocking a homeless person, amongst numerous other things in his past. True to form, Saunders told the commission to “…suck his dick” upon being denied the ability to fight in the states.

Walter Kautondokwa will now face “Boo Boo” Andrade at the TD Garden in Boston on October 20, live on DAZN.

Kautondokwa (17-0 16KOs) and not much is known about the Namibian fighter expect that he has only gone the distance once and that he is a tall fighter who fights in close not unlike a Willie Nelson or Paul Williams.

Andrade (25-0 16KOs) was sparring southpaws in preparation for Saunders will now switch to an orthodox fighter, who is only that in his stance.

Andrade took this fight extremely serious as he left his home on the east coast and relocated for a month and a half to the Bay Area to train at the private SNAC facility private gym. Andrade training side-by-side with Devin Haney and Daniel Jacobs, both of whom split time with him during training camp.

Kautondokwa is the great unknown and for Andrade that is a blessing and curse as Andrade is one of the most decorated American fighters never to get the accolades or praise of fighters of his stature.
On the undercard to this fight card, Philadelphia’s Tevin Farmer makes the first defense of his IBF World super featherweight title against James Tennyson and Irish sensation Katie Taylor puts her WBA and IBF World lightweight straps on the line against New York’s Cindy Serrano.

Thomas Dulorme deserves more respect in the sport of boxing