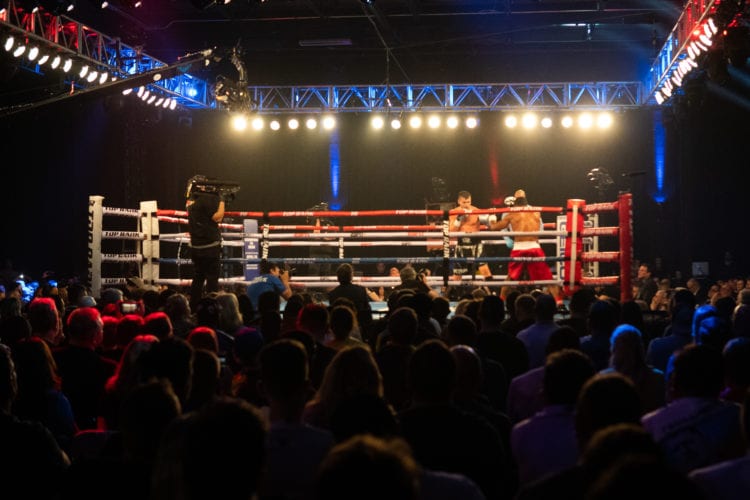 PHILADELPHIA – Every single seat at the 2300 Arena in south Philadelphia was filled for Saturday night’s Top Rank card. 11 bouts were held at the sold-out arena that showcased five fighters from the Philadelphia area and a light heavyweight world title main event fight that featured WBC champion Oleksander Gvosdyk. The card was mixed with action, underwhelming performances and a strange stoppage. Let’s start with the good.

Conto cruises to a crowd-pleasing KO

Sonny Conto was supposed to make easy work of the journeyman, and he did just that. The 23-year old Philadelphia-native needed less than three minutes to knock out Acosta. Conto didn’t just bully his way through this fight, he showed his boxing knowledge. Instead of rushing in and smothering the pop on his punches as most young prospects do, Conto used his jab to find the perfect range to throw power shots from. The convincing performance earned Conto a spot on the Tyson Fury undercard scheduled to take place on June 15th in Las Vegas.

Jeremy Adorno had strong support in the stands for his professional boxing debut, but his fans weren’t all cheers for the entirety of the fight. Sebastian Baltazar proved to be a game opponent despite his losing record and undersized frame. The scrappy Baltazar would stand in the pocket and trade overhand rights with Adorno, proving he was unphased by Adorno’s height and reach advantage. Though Baltazar had strong moments and undoubted toughness, the four round fight was predominantly controlled by the rangy Adorno with his long jab and ability to throw rapid combinations.

Ortiz made quick work of Thomas, knocking Thomas out in 2:53 of the opening round. Ortiz’ hand speed and skill was clearly superior in this match up.

The co-main event featured another Philly fighter in ‘The New’ Ray Robinson. Coming off a TKO defeat to Yoerdenis Ugas in his last fight, Robinson looked to have a solid comeback performance. Although he was never truly hurt against Kavaliauskas – who is the ranked the No. 1 welterweight contender by the World Boxing Organization – Robinson seemed content to jab on the outside without risking any serious exchange of punches. Kavaliauskas also struggled during the fight in finding a comfortable range to let off power shots. It was a close fight with a lot of tension in the ring, but the performances seemed underwhelming and somewhat timid.

Ngumbu’s first world title shot and Gvozdyk’s first world title defense ended unexpectedly. In the fifth round Ngumbu suddenly dropped his guard, turned his back and took a knee. He showed emotions of severe pain and pointed to his right leg. After a few minutes of Ngumbu trying to walk it off, the fight was waived off for a non-contact injury after consulting with his corner and doctor.

Heavyweight prospect Cassius Chaney (15-0, 9 KOs) made quick work of Christian Mariscal (12-3, 5 KOs) by dropping him twice in the first round.

Christian Mbili (13-0, 13 KO) beat veteran Humberto Guiterrez Ochoa (33-7-2, 22 KOs) in an eight round middleweight scrap. For nearly every round, the fight was fought chest to chest. Although Mbili was unable to stop the former world champion, Mbili controlled the range and landed the more significant strikes throughout the fight.

Juan Ruiz scored a fourth round stoppage over Fredrick Lawson to end a two-fight losing streak.