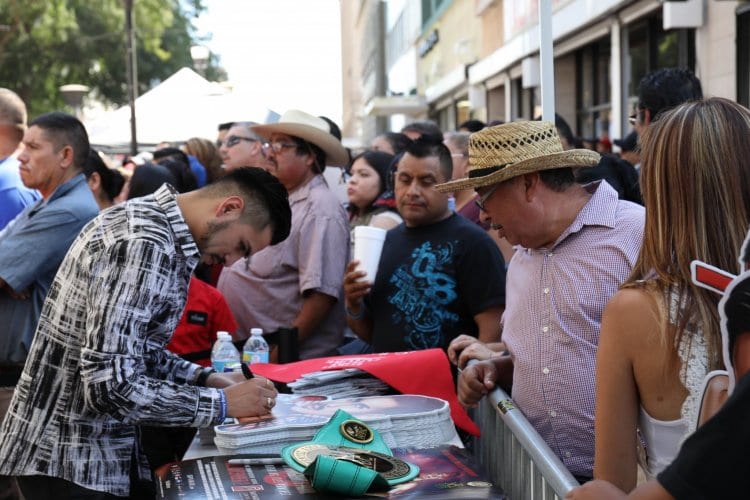 The story which was reported by Mike Coppinger, explains that the bout will more than likely land at the College Park Center on the University of Texas-Arlington campus, home of the WNBA’s Dallas Wings, and will be broadcast on DAZN.

The fight announcement could come this weekend with the Gennady Golovkin versus Steve Rolls being a marquee fight on the network, equally Vasyl Lomachenko vs. Luke Campbell will end up on ESPN as well as the bouts will serve as a trade of sorts, between the networks of ESPN and DAZN.

Ramirez (24-0, 16KOs) won his WBC title with a 12-round over Amir Imam in their vacant title fight last March at Madison Square Garden’s Hulu Theater in New York City, broadcast on ESPN. The 2012 U.S. Olympian has made two successful defenses against Antonio Orozco and Jose Zepeda, both coming at Save Mart Arena in Fresno. Ramirez will be on the road for the first time since winning the belt.

Hooker (26-0-3, 17KOs) has not fought at home since a June 2015 knockout win over then-unbeaten Eduardo Galindo, when Hooker was a prospect seeking to go to the next level and become a contender. Hooker struggled with Darleys Perez having many writers and fans writing him off, but an upset victory over Terry Flanagan saw him becoming the WBO super lightweight title.

Last November, Hooker traveled to Alex Saucedo’s hometown of Oklahoma, in what was thought to be a massive title win for Saucedo, only for Hooker to knockout Saucedo. Hooker defeated his fourth straight undefeated opponent earlier this year in Mikkel LesPierre, a fighter signed by Lou DiBella.

The unification also adds excitement to the Regis Prograis versus Josh Taylor World Boxing Super Series final as the winner of that tournament will hold the WBA and IBF super lightweight titles and be looking to unify with the winner of Ramirez vs. Hooker.