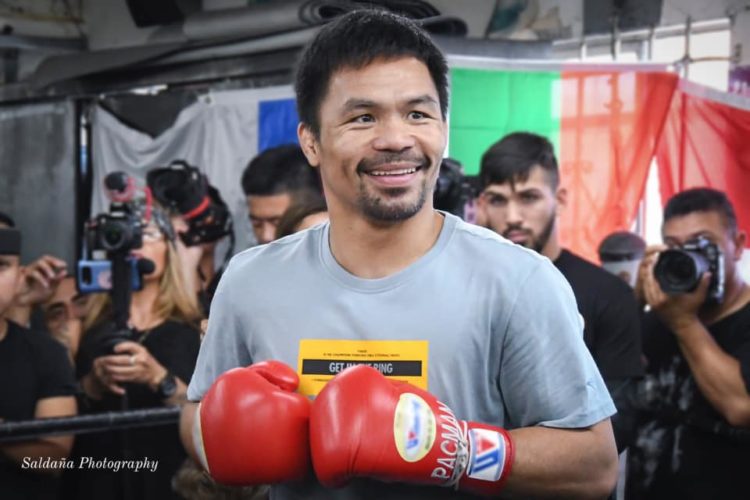 Manny Pacquiao is already a legend of boxing, a senator and ambassador of the Philippines as well as just a force of nature for boxing in the 21st century. Unless you have hatred in your blood it is hard not to give Manny Pacquiao props.

Pacquiao is returning for his seventy-first fight against undefeated Keith “One-Time” Thurman, a man who has the best resume amongst active welterweights as well as some of the longest layoffs amongst active welterweights, making him a polarizing figure. Thurman defeated Shawn Porter and Danny Garcia in back-to-back bouts both on CBS in front of literally millions of viewers, then essentially was out with an injury for two years. Thurman returns in a lackluster manner against Josesito Lopez, and now people just wonder, if Thurman still has it.

Meanwhile, Pacquiao has been one of these special fighters for most of my adult life has been fighting in meaningful bouts. When I was eighteen years old, that was 2003, Pacquiao fought Juan Manuel Marquez the fighter whom he will always be tied to and now still, sixteen years later, still at the top of the sport fighting in a marquee, million-dollar boxing matches.

Pacquiao will always be linked to Floyd Mayweather as the one and two of their generation, but that is unfair. Pacquiao was his own thing. A flurry of hard punches in a jump-in, jump-out style, that was reckless and overwhelming, fans loved him because he was pure action, and Pacquiao lost bouts, because of that. Case and point, the last Juan Manuel Marquez bout that saw him brutally knocked out.

This fight camp has been unique. It is the first camp I felt like I watched it from social media, daily. A lot of Los Angeles-based boxers or boxing people I know seemingly ran with Pacquiao regularly as well as did abs with him. Sure, the training camp with Buboy and Freddie Roach was private, but it was refreshing to see a boxer at the highest level of the sport, so accessible to the general public.

It could be, who Manny Pacquiao is, it could be a cultural thing, but I am used to stars getting money and going to seclusion, in fact, if I got a lot of money I’d probably do that, but Pacquiao is humble and public, which is rare. This is why he has always been the people’s champion as people lined up outside of his house for him to give them money, how he has a crew of people he takes care of, Pacquiao is selfless, but sometimes that has gotten him into financial woes outside of the ring.

Also, the inclusion of Sean Gibbons to Manny Pacquiao’s team has added a new spark to Pacquiao’s career. Pacquiao after the Jeff Horn loss was thought to be finished, his career over. Gibbons has since joined the team, and helped him secure a dominant PPV win over Adrien Broner and now has him in position to potentially be in the running for the fighter of the year if he were to dominantly beat Keith Thurman. This is something a few years ago, might have been scoffed at, but Gibbons has put forth the energy and path that has given Pacquiao new life.

While Keith Thurman worked out to a few media members in St. Petersburg, Florida, stating he will stop Pacquiao in less than six rounds, Pacquiao seems genuinely happy, which is confusing.

Typically when a boxer has found happiness, they’re no longer the legend they once were, but Pacquiao is an enigma, he is the type of fighter, who is the exception to the rule. Pacquiao seems reinvested in the sport of boxing, and ready for this 50-50 booking against Keith Thurman, in which it is two fighters at crossroads, Pacquiao facing the age crossroad, and Thurman facing the motivation crossroad, as a loss will relegate the loser into an unsavory position.