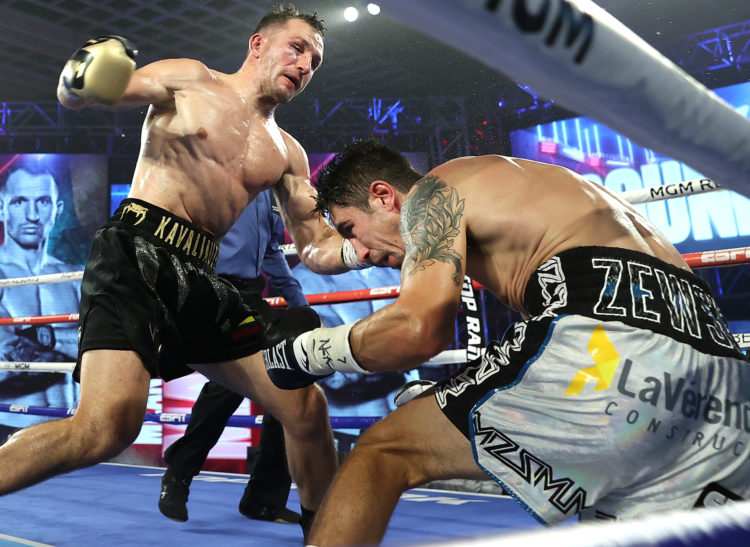 Egidijus “Mean Machine” Kavaliauskas faced adversity, but thanks to will power, his own own power and solid coaching by Marco Contreras, Kavaliauskas won. In his first fight since losing to pound-for-pound king Terence Crawford last December, Kavaliauskas knocked out Canadian veteran Mikael Zewski seconds into the eighth round.

Kavaliauskas (22-1-1, 18 KOs) sent Zewski (34-2, 23 KOs) down with a thudding combination to close out the seventh round, then jumped on him to start the eighth round, in which Kenny Bayless waved off the contest.

Prior to the knockdown, Zewski was giving Mean Machine fits with an active jab, and solid footwork. In fact, Zewski was leading on two of the judges’ scorecards at the time of the stoppage.

The big takeaway from this fight. Mean Machine is a formidable opponent for any of the top welterweights and might have to fight Terence Crawford, Jose Benavidez Jr., whoever emerges as Premier Boxing Champions has a monopoly on this division, and I don’t see Mean Machine ever being in a position to be in a purse bid with one of their fighters, or meriting big enough purse to outweigh the risk he brings. A fight I’d like to see down the road is Mean Machine versus Vergil Ortiz Jr., an emerging power-puncher, who is ticking all the boxes of being a star, but just needs the classic bouts, and being promoted by Golden Boy Promotions, the bout is feasible.

Zewski won even in a loss, I don’t think many outside of his team thought he’d fair this well, and despite losing, many opportunities should come from this as he has established himself as a solid welterweight, and one who could potentially challenge an emerging fighter on the rise as well.

In the featherweight co-feature, Joet Gonzalez picked up the WBO Intercontinental belt with a dominant decision (99-91 2x and 97-93) over a three-time world title challenger Miguel Marriaga (29-4, 25 KOs). Gonzalez (24-1, 14 KOs) had not fought since losing a one-sided decision to Shakur Stevenson last October for the vacant WBO featherweight world title.

Gonzalez pressed Marriaga, who struggled with Gonzalez’s aggression until late in the fight, in which Marriaga appeared much more confident.

Featherweight: Aleem Jumakhonov (9-3-2, 5 KOs), who fights out of Outlaws Boxing, and is coached by Brandon Krause knocked out Jorge Ramos (7-3-1, 4 KOs) in the third round. Jumakhonov is a high-volume, pressure fighter willing to sell-out to close the show.

Bantamweight: Manuel Flores (9-0, 6 KOs) stopped Jonathan Rodriguez (8-1, 3 KOs) in five rounds. The bout was darn close until the stoppage, as the two undefeated fighters traded leather from start to finish, it is a shame that a loss means so much in boxing because neither should be diminished from such a fight.

Junior Lightweight: Anthony Chavez (9-1, 3 KOs) won a six-round decision over spoiler Adan Gonzales (5-4-2, 2 KOs). The bout saw some odd occurrences as an early knocked down Gonzales scored on Chavez was overruled in the final round as a slip. Chavez dropped Gonzales as well, as the Henry Ramirez-trained fighter, Chavez won the bout 58-55 on all three cards as, despite the ruling, he would’ve won the fight.

Lightweight: Eric Puente (4-0) of the Robert Garcia Boxing Academy won a four-round decision over Luis Norambuena (4-6-1), this was the second appearence for Puente, who beat Diego Elizondo in his first apperance. Puente is a part of the Split-T Mangement group headed by David McWater.

WHY YOU SHOULD WATCH JARON BOOTS ENNIS ON SATURDAY