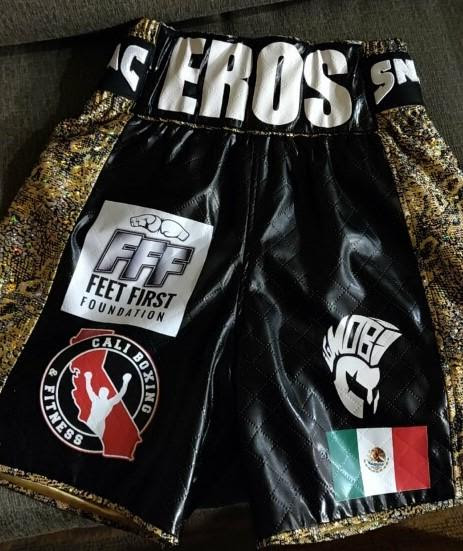 Unbeaten super-bantamweight prospect Eros Correa (9-0, 7 KOs,) is proud to represent the Feet First Foundation, a non-profit that helps at-risk youth learn strong character and focus through the art of textbook boxing. Correa, the 2012 U.S. Olympic alternate, as well as an undefeated knockout artist at the lower weights, will wear the FFF patch on his trunks when he faces the most formidable test of his professional career, Henry Arredondo, who is better known by his nickname of “World Star”.

The 8-round bout will be televised on FS1 PBC Fight Night and on FOX Deportes this Saturday, November 14 from STAPLES Center in Los Angeles.

“It is an honor to represent an organization I so strongly believe in,” said the emerging contender Correa about the Bay Area-based non-profit which is now emerging in new states such as Texas, Oklahoma, New York, and Nevada. “Boxing has helped so many people dealing with anxiety, depression, and suicidal thoughts. In addition, Feet First Foundation will help build the next generation of boxing fans.”

The organization, founded by Sean Sharkey, Dan Dorsett, and Zach Micheletti, has expanded year-after-year bringing in founding partner Brandon Kregel, for scaling the foundation amongst other notable representatives, who can be found on the foundation’s board member page.
This will mark the biggest launch into the boxing sphere for the boxing non-profit, as their logo will be front-and-center for those watching the FS1 boxing telecast. The foundation that started from a conversation between Dorsett to Sharkey can be reflected upon simply from this quote, Sharkey made previously.

“I met Dan three years ago,” said Sean Sharkey reflectively. “The boxing program along with the gym itself had a positive impact on his whole family, and one day he asked me if I would like to do it on a bigger scale based on the positive changes he saw to himself and his children. From that point, we are now working to make our program available in all states across America.”

This interaction has led to school programs in California, now Texas, Oklahoma, New York, Nevada, and sooner other states.

Sharkey’s good deeds were met with Dorsett’s drive to get the program in front of as many young people who need help and the two became an unstoppable force. The next stop is national exposure, documentaries, features, and supporting and endorsing professional boxers such as Eros Correa, and Omar Juarez, who function as brand ambassadors.

“I am just a kid from San Jose with a dream, and I am hoping to inspire others, and hopefully partnering with Feet First Foundation will help me fulfill this my vision,” said Correa. “

The FS1 PBC Fight Night card is headlined by undefeated middleweights Amilcar Vidal and Edward “The Hunter” Ortiz squaring-off in a 10-round showdown.

Correa will be adorning Feet First Foundation gear for this fight, as he looks to be able to help be one of the fighters who bring the organization to the forefront of the sport of boxing.
Correa fights this Saturday, November 14th on FS1, for more information on the Feet First Foundation, please visit feetfirstnp.org.