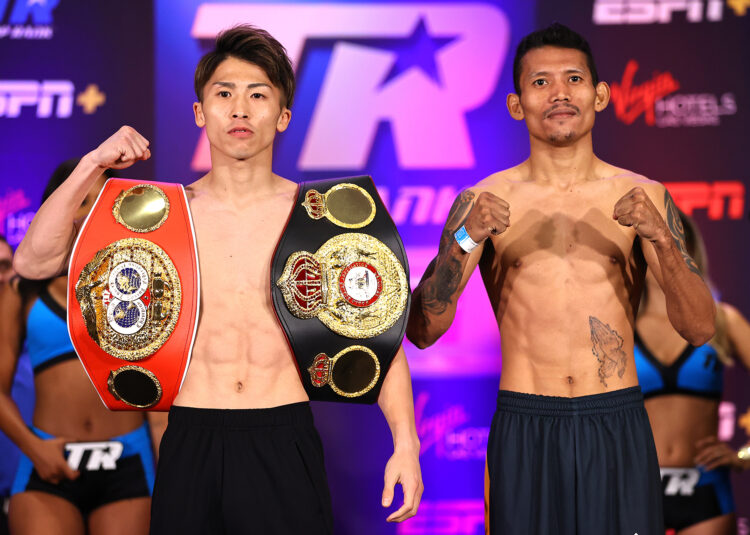 WBA/IBF bantamweight champion Naoya Inoue (21-0, 18 KOs), and widely considered one of the best fighters in the world ran through Michael Dasmarinas (30-3-1, 20 KOs) in three rounds on Saturday night at Virgin Hotels Las Vegas. Inoue dropped Dasmarinas with a body shot in round two and gave him two more knockdowns in round three for good measure. Inoue is a surgicial, assasin, a patience killer, who exists in the lower weight classes, which is rare. Inoue is something special, enjoy the ride, while we get to have him in the U.S., at viewable hours.

WBO women’s super featherweight champion Mikaela Mayer (15-0, 5 KOs) outpointed Erica Farias (26-5, 10 KOs) over ten rounds. Mayer handled herself well, but could work to improve on her defense after throwing combination punches, Frias was game and threw in exchanges. The WBSS will return in Mayer’s weight class 130 lbs, and hopefully, she can be involved in that event. The judges saw it 97-93, 98-92, 98-92.

Former WBO 122lb champion Isaac Dogboe (22-2, 15 KOs) looks well on his way to getting another world title shot in the near future as he picked up a ten round majority decision over Adam “Blue Nose” Lopez (15-3, 6 KOs) in a featherweight bout. easily, the most entraining and competitive fight of the weekend, you could see Barry Hunter’s influence on Dogboe early who took a lead early with a mix of boxing and banging, or in simpler words, switched it up. Lopez came on strong in the second half of the fight as the uppercut he threw couldn’t miss, and the last few rounds were dominated by Lopez, and I am not using that lightly.

Lightweight Eric Puente (6-0, 0 KOs) got up from a first-round knockdown, but will now have future questions to answer as despite winning a unanimous decision against Jose Antonio Meza (7-6, 2 KOs), with no knockouts and now being dropped by a fighter with only 2 KOs, Puente will need to mature quickly. Scores were 57-56, 58-55, 58-55.

In a fight in which someone’s 0 had to go junior welterweights, Omar Rosario (4-0, 2 KOs) of Puerto Rico stopped JJ Mariano (3-1, 2 KOs) of Reno, Nevada, in the fourth round. Rosario is from the same town as Miguel Cotto in Puerto Rico, and dropped Mariano several times. Mariano was a good ticket seller in the Reno area who would fight on Terry and Tommy Lane, The Lane Brothers, boxing card in northwestern Nevada.