Chris Colbert – The New Camacho, Rivera Looks Like Ali, And Fight Schedule For The Weekend 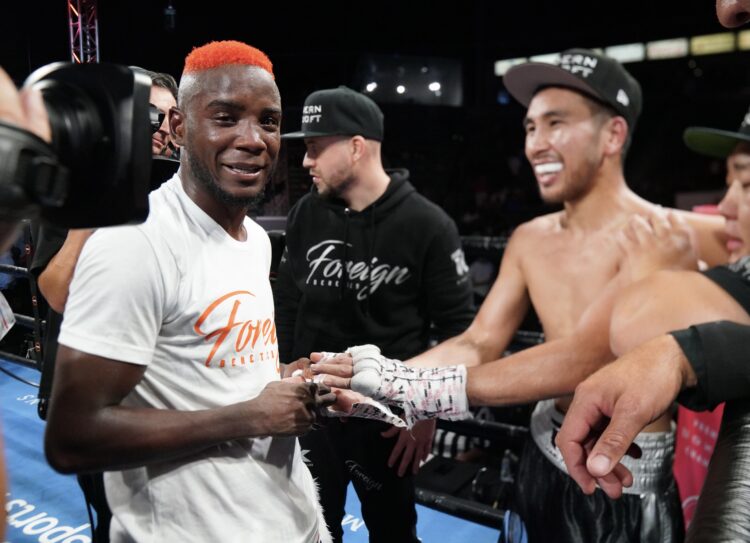 Chris Colbert has a lot to like about him. He dyes his hair in honor of awareness for social causes and awareness, for example, his hair color, last Saturday night when he defeated Tugstsogt Nyambayar by way of a twelve-round unanimous decision, was orange representing multiple sclerosis. Colbert entered the ring with an outfit that spoke to prison reform, as the justice system, and systematic problems around those issues have been an issue highly touted and debated in the political landscape, and Colbert gives back to those in his community, with a football program, and a local business.

Colbert is everything we want in a young fighter, at just 24-years-old, and has a great coach in Aureliano Sosa, while holding the interim WBA super featherweight title. In short, seemingly a slam-dunk for someone to carry the sport to the next generation, and being aligned with Showtime, his story could crossover to viewers of original programming on that network, such as “The Chi”.

To me, Colbert is the closest thing we have seen to Hector Camacho since Camacho, but the book is unwritten. Colbert has the speed and the flash, but now he has to earn the superstardom with major performances. Colbert’s performance against a top-10 featherweight moving up a weight class on roughly ten days’ notice was a good start, but it wasn’t the type of performance that will cement him amongst the all-time greats.

Colbert, who many know as “Lil B-Hop”, and now goes by “Primetime”, has fought seven fighters who are undefeated or have only one loss in his sixteen professional fights over the course of 106 rounds. He has taken a harder road than most, but at the same time, he isn’t defined yet, against Nyambayar some red flags did arise.

Colbert was hit a lot with right-hands from a smaller fighter, sure you can accredit speed possibly being a factor, and/or a variable, but Colbert is one of the fastest in the division, and a fighter from a weight below shouldn’t have a massive difference in terms of speed. Colbert, at times, seems to get bored winning a fight, and wants to entertain the fans and possibly himself, and puts himself in risky situations such as pulling straight back, these habits will have to be sharpened at the highest level of the sport.

Colbert holds a form of a world title, but is more of a prospect in my eyes than a capital G Guy in the sport of boxing, and now we have to see will Colbert get the time to develop, or will Colbert be put into the big fights soon. My gut feeling is Al Haymon, and the PBC universe will bring him along correctly and he will be the new PBC star of the 130 lbs division, along with chief rival Xavier Martinez, who I hope he faces for the WBA world title, if Gervonta Davis were to vacate.

With the talent, showmanship, and Colbert’s ability to generate headlines, case-and-point his comments towards Deontay Wilder making headlines, it will be hard to fairly assess Colbert as he has all the flash, and the billing of a main event fighter, but with fewer fights than most headliners.

I am reasonably optimistic about Colbert progressing through the sport after Saturday, as I know he is a great fighter, the new question is, and can Colbert jump into the tier of all-time great because it seems Colbert has that type of potential.

Rivera Is Here – Rolly Next?

Michel Rivera has quite a gimmick calling himself “the reincarnation of Muhammad Ali”, as he looked like a smaller version of Ali, mostly in appearance might I add.

Michel Rivera got off the canvas to record a highlight-reel KO over Jon Fernandez in the eighth round and now is the WBA lightweight mandatory challenger for their world title which currently has three world champions.

Rivera, who is trained by Herman Caicedo, who has trained professional boxers Luis Ortiz, and Juan Carlos Payano, also has a lineage dating back to Muhammad Ali, a fighter Rivera seeks inspiration from as Ali’s name was on his trunks, and his flat-top haircut looked like a young Ali.

Rivera was not the most active fighter we have ever seen, and his defense is solid, using his legs more than traditional slips of punches, but what I saw was deeper than most observations. I saw a guy, who lost the third round and got yelled at in the corner and won the next round. Even more than that, I saw Rivera get dropped in the sixth, get up and then perform a highlight-reel KO.

The fight served its purpose as an introduction of Michel Rivera to the world as a whole.

Rolando Romero fights in two weeks on Showtime against Austin Dulay, if Romero wins that fight, a fight between Michel Rivera and Rolando Romero would be a great fight that could be a gateway to a pay-per-view fight with boxing superstar, Gervonta “Tank” Davis.

The one red flag we might have to watch is Rivera’s identity is so closely tied to Muhammad Ali, that one could wonder if Rivera’s own persona or essence might get lost, in his branding or inspirations from “The Greatest Ever”.

Richardson Hitchins was unable to fight

Rather silently, Richardson Hitchins was pulled from the triple-header as his opponent Darwin Price, was left without a fight at the 140 lbs. Hitchins, who was removed from the card with an injury that many alleged to be in regards to his hands. Nonetheless, the 2016 Haitian Olympian will hopefully return sometime in the fall.

Donaire vs. Casimero Off

The whole thing is happening to publicly for my liking as drug testing is the key issue, and nothing can seem sto be substantiated until an accredited anti-doping agency weighs in. It is a more harmless, but similar version of bickering on social media, as Nonito Donaire is no longer fighting John Riel Casimero, on August 14th, and Guillermo Rigondeaux appears to be back in the fight.

You can look on the internet to read more, but the whole thing is getting very personal, and is worthy of a deep-dive, not a slew of words.

Tim Tszyu is looking like a future world champion, and that being said Michael Zerafa, a solid Australian regional guy, best known for his losses to Peter “Kid Chocolate” Quillin, Kell Brook and Jeff Horn, is now out of the fight with Tsyzu, this Wednesday, July 7th, as “The Soul Taker” Tszyu will face Steve Spark, on essentially a week’s notice.

Tszyu is the son of former world champion Kostya Tsyzu.

Angel Alejandro defeated Rudy Ochoa via an eight-round decision, as Alejandro keeps his undefeated record. Alejandro, a fighter from the Dallas area, picked up the biggest win of his career so far.

Gabriela Fundora, or the great boxing reporter Jake Donovan calls her “The Towering Inferna”, a nickname with the feminine denomination of her brother, Sebastian Fundora’s nickname, “The Towering Inferno” picked up a four-round decision over Indeya Smith. Fundora fights at 115 lbs, despite being 5’9″.

Daniel Garcia, a lightweight who fought at the 2019 Olympic Trials picked up a second-round TKO over previously unbeaten Gabe Sandoval.

Shon Mondragon and Jose Perez fight to a draw. The bout was not televised, but via Boog Williams, a passionate boxing reporter, the fight was close, and came down to how you score it. Mondragon is a decoraed national champion with six professional wins, and no losses, the draw was a surprise against 9-1-1 Jose Perez.

Multiple time national champion Demontaze “Juicy” Duncan stopped his opponent Hugo Padilla in the third round of a scheduled four-round bout. Padilla had faced Eric Altamirano and Blair Cobbs earlier in his career, going the distance with Cobbs. Duncan is an aggressive offensive minded fighter with all four of his wins coming by way of knockout, and fights out of Louisville, Kentucky.

Giovannie Gonzlaez had retired after his last fight, but decided to return for seemingly one more fight as Gonzalez defeated Christian Rene Arenas, to win the UBO featherweight world title.

What To Watch This Week

For those who are gainfully employed, you might have to watch this fight in hindsight, as on the west coast this card starts at 6 PM PST, Gilberto “Zurdo” Ramirez, a former world champion at 168 lbs, who left his promoter Top Rank recently, signed with Golden Boy Promotions, and in his debut with the entity with his new promoter, will fight veteran tough guy, Sullivan Barrera. Barrera, who has had a see-saw like past couple of years, facing the best in the world, and losing his last bout to Jesse Hart, a man Ramirez beat twice, will definitely be a fight that defines both fighters trajectories for the near future in the light heavyweight division. This will be Ramirez’s third fight at 175 lbs, whereas Barrera has been a career light-heavyweight.

An interesting co-feature will see Joseph Diaz Jr., moving up yet another weight class to 135 lbs to face Javier Fortuna, a veteran puncher, who gives everyone a hard fight. Diaz Jr., a 2012 Olympian, who has as much talent as anyone in the division, is looking to put things together in the ring, as Diaz lost a world title on the scales twice, once against Jesus Rojas missing weight by a 1/2 pound as he was unable to win the WBA featherweight title, and in his last fight after defeating Tevin Farmer for the IBF super featherweight world title, Diaz lost the belt on the scales when facing Shavkatdzhon Rakhimov, coming in at 133 1/2, 3-and-a-half pounds over the limit. That fight also was ruled a draw, which was off-putting to many who believe in Diaz’s talent.

Diaz Jr. is the far more talented fighter of the two, Fortuna is tough, and explosive puncher, but that is about it. The big question with Diaz Jr is focus, between weight issues that now seem reoccurring as well as a lawsuit between his former manager Ralph Heredia, and now advisor, MTK Global. Diaz Jr. seems focused, but we will find out at the weigh-in what is in-store.

The bout is for the WBC interim lightweight world title, that Ryan Garcia had won, but was stripped off when he took time away from the sport due to mental health related issues, this bout could see the winner facing Garcia in the near future.

One of my favorite fighters, Seniesa Estrada will look to be a two-division world champion, as she faces Tenkai Tsunami for the WBO light flyweight title. Estrada is one of the must-see-stars in boxing, in my opinion, and won her first world title in her last fight, in the minimum weight division, against Anabel Ortiz.

Sulem Urbina, a great ambassador of the sport, fights on the undercard as well as Urbina, will look to win her first world title as she faces Naoko Fujioka for the WBA flyweight world title. If Urbina can win this fight, a bout between her and Estrada would be an interesting affair in the near future. Urbina’s last fight was a loss to Marlen Esparza.

The sleeper of the card is Hector Tanajara Jr taking on William Zepeda, in a boxer versus puncher match-up. Tanajara, a highly decorated amateur has been working with the Robert Garcia Boxing Academy to covert to a more professional style, while keeping his great distance control, Zepeda is a pure pro, with 20 KOs in 22 fights. This one will create a world title contender in the lightweight division.

The 2020 Olympics Boxing Preview - Who Are The Favorites To Win Gold?

Chris Colbert – The New Camacho, Rivera Looks Like Ali, And Fight Schedule For The Weekend