These are just my views and observations from the Junior Olympics in Lubbock, Texas, and by no means are they the end-all, be-all in terms of what occurred, but this is what stood-out to me, to help give further exposure to young-and-deserving fighters fighting in the USA Boxing system.

The younger brother of Lamont Roach Jr., and trained by his father, Lamont Roach Sr., is a special fighter, who saw his first two bouts end via stoppage. Jordan Roach just seemed to be on another level as he looked to be a different level compared to his peers.

Lamont Roach won his bracket fairly easily and veteran broadcaster Beto Duran hinted on the Golden Boy Promotions telecast last Friday, during his brother’s fight, that Jordan Roach could be a pro in the next couple of years. In terms of the future of 114 lbs in America, I see two fighters, Jordan Roach and Steven Navarro – and then a gap between them.

Roach had the most dominate tournament of any fighter in this tournament.

The first black Bay Area native to win an elite tournament since Andre Ward, Steve Johnson from San Francisco, California, won his first elite national tournament, as the talent has been there, but now the results are there as well. Johnson, a southpaw, is slick with a pro-ready style that he is having to adapt to the amateurs that favors volume.

Johnson was one of the main stories of the tournament and looks to be the main rival of Jahmal Harvey as the two will more than likely find themselves competing against each other over the next few years, especially as the 2024 Olympic Games approach. I see Jahmal Harvey and Steve Johnson currently as the best in this weight class in elite men’s currently.

One of the best women in the nation when it comes to boxing, Arianna Carrasco, and her father, have made a large commitment to the sport of boxing, and it shows in her fighting style. Carrasco is already, in my opinion, a lock for the 2024 U.S. Olympic Team, and feels like an early favorite for a medal. Carrasco is just seemingly a level above her competition.

Carrasco had a very elite and high-level training camp that involved Sierra Martinez in the build-up to the Junior Olympics, and it showed as both Carrasco and Martinez gave their opponents standing-eight counts in the finals. I would start watching Carrasco as soon as possible if you’re a fan of women’s boxing.

Carrasco feels like a star of the 2024 U.S. Olympic Team.

The Sierra Martinez I had seen prior to the COVID-19 pandemic returned in her finals bout, against one of her newest rivals, J.J. Smith, who now resides in Bay Point, California. Martinez has God given gifts that make her unique as fighter, that many fighters don’t have, and more so, spending a whole camp with her peer Arianna Carrasco seemed to help.

Martinez’s footwork in particular was much improved from her last few fights, and now it will be exciting to see how she builds on this performance, as she will face J.J. Smith, Faith Mendez, and Daisy Bamberger in the near future, at future national tournaments.

I was very impressed with what Martinez did.

The best heavyweight at the tournament, working with one of the best coaches in the country Rashiem Jefferson Sr., in Philly will now be a fighter I watch onward. Turner’s division wasn’t deep-at-all, fighting only two times, to win his bracket, but that being said, his skills will translate well to the pros based on what I saw.

Fighters with talent at the higher weights always get the added benefit, that in the pros people want to see them compete, a tad bit more. Turner’s loss at the nationals was in the heavyweight championship to the winner Jarvis Winn.

Turner is more a of a pro-style fighter look to land big shots, and would probably benefit from longer rounds, and smaller gloves.

The winner of one of the toughest brackets in the tournament, Lee is a smart fighter, who fights within himself, had a great tournament, and his win over Deric Davis impressed me, as Davis is a top-level-type prospect, who I feel only very good fighters can beat. So that means, Lee is very good, in my book. Lee is one of these good fighters that because of his humble-and-mild-manner attitude he isn’t getting as much attention, as he lets his actions speak for themselves in the ring.

Lee winning his tournament isn’t a win, it is message to those in his division.

The winner of the 165 lbs bracket, Iseni, will be an interesting fighter to follow in the future, as he has good movement, and a solid assortment of punches. The 178 lbs elite division, will more than likely see Rahim Gonzales via for an Olympic spot in 2024, as Gonzales was unable to compete for his spot this year due to COVID.

Iseni is working with a top coach in Aurelino Sosa, who you might have seen on Showtime a few weeks ago working with Chris Colbert.

Iseni is awkward, and disruptor, and will get a chance to be a notable pro, and now is also a 5x national champion.

Aggressive with a solid use of distance, Anderson from upstate New York, is a fighter who looks to land big punches on his opponent, but also throws a lot of volume. What makes Anderson unique is he throws pro-style punches with amateur boxing volume. If nothing else, Anderson is one of the more exciting American fighters emerging in a weight class that fans are always fond of.

What was most impressive about Anderson, who on social media goes by “Cashman”, is that he wins by stoppage as stopped Ethan Tillman in his final bout. If you’re looking for someone who could get a lot of knockouts as a professional in a short period of time, Anderson is someone to watch for.

Acosta defended his number one seed entering into the tournament, which is an impressive feat as the bullseye is on you the whole team, and it is easy to great distracted. Acosta is tough and talented fighter, who is having a very solid amateur career,

The only fighters to beat Acosta in recent memory are Omari Jones, and 2020 Olympian Delante “Tiger” Johnson, which says a lot.

A homegrown fighter from The Rockaway Ropes Boxing in Brooklyn, New York, as the gym baed around the housing authority in one of the roughest parts of the city, became the brainchild of coach, Kenyatta Harris. Is Pettigrew the finished product – no. How will he fare at elite, I don’t know? The thing I do know is he is proven on the national level to be in the conversation and could develop quite nicely.

Pettigrew shocked me in losing to Fabian Diaz in the finals, but it shows that Pettigrew isn’t the finished product, yet I still believe the ceiling is very high for Pettigrew, who could develop into a notable fighter.

Lozano is a great Mexican pressure fighter, who won her bracket, and more than likely we will be a very good professional boxer. I am not sure we will see Jennifer Lozano stick around for much longer in the amateurs, as her style seems ready made for the pros.

A theme of every national tournament for the past few years, but really for decades it seems is, that despite winning and being effective in tournaments, Hawaii never gets its fair share of respect, in these recaps, yet consistently upsets, and performs well in national tournaments. I should’ve listed all the fighters by name, but I am lazy, and covering the amateurs is hard, since everything you write that is wrong you get phone calls about, but the good stuff you do, for the most part, goes unnoticed. I wanted to give shine to Hawaii for having a great boxing program.

J.J. Smith of Bay Point, California, train with the Lion’s Den Boxing Gym in Pittsburg, California, along with Team Juice, has shown a ton of growth over the past year, and now is become a force on the national stage. Smith is tall for the weight class and recorded a stoppage win in this tournament as well. Smith’s stock looks to be going up.

Despite losing to Martinez in the finals Smith is developing into one of the notable fighters on the national stage.

It is noteworthy when a 106 lbs fighter records a stoppage victory, and when a 106 lbs youth female does it, it is something to take note of. Camarillo is someone to keep on your radar for national events, moving forward.

Terry Washington is a very talented fighter, who consistently goes deep into every tournament I watch. I have high hopes for him as continues as a boxer though it is somewhat unclear what his path moving forward will be because he campaigns at such a low weight. Washington has talent and is getting better and better.

Hailing from a place boxers rarely come from, Marina Del Rey, California, Carson Crawford is a skilled fighter, but I see an interesting story more so. Crawford won the elite female 141 lbs division and is someone to watch for, if for nothing else, we need more Carson Crawford’s in the sport of boxing.

“Scooter” Davis is a very good fighter, who can already see would make a good pro. With hashtags, a solid following on social media, and a good skill set. Deric “Scooter” Davis should be a fighter you see at some point in professional boxing.

Lorenzo Powell is a very solid fighter, who might be more suited to the pros, than the amateurs as the traits I like best about him don’t get rewarded, being patient and not just running into shots. Powell’s coach, Marty Chima, has only two fighters he trains and was one of the last coaches to work with Sacramento boxing legend Don Conley, so Powell has the pedigree to be a good fighter. 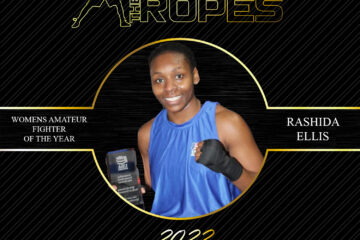