The Bay Area is being represented in the upcoming event being held by the world’s foremost kickboxing league, Glory Kickboxing. Collision 3 is set for October 23, 2021 and features the Bay Area’s own Matt Baker, Middleweight Division, versus Turkish athlete Serkan Ozcaglayan, who makes his debut inside the GLORY Ring.

In 2013, Baker won the WKA North American title while also placing second in the Open-Weight category in the same tournament, stacked with much larger opponents. Then went on to the World tournament Winning and Unifying the WKA and WTKA World Championships.

Both in 2012 in Russia and 2014 in Malaysia Baker was a part of Team USA competing at the IFMA World Championship Tournament earning a bronze medal both years, a particularly notable accomplishment as the IFMAs are the equivalent of the Olympics of Muay Thai.

Collision 3 marks Bakers first fight since his big win at Glory 68 against Ivan Galaz in September of 2019. “I’m back. Dedicated like always. I used the pandemic to keep working and keep that 1% better mentality everyday. Bay Area, stand up. America, stand up. I’m coming to represent.”, says Baker.

Baker is training under Anucha Chaiyasen, who is now known as Jongsanan “The Woodenman” in San Francisco honing his skills under the Legendary Thai trainer everyday at WoodenMan Muay Thai academy and doing a comprehensive recovery program at Arena Training Center in Livermore that includes whole body cryotherapy, infrared sauna, and float therapy.

The Bay Area has no shortage of high profile athletes in the NFL, UFC, and NHL. Baker, being in the world ranked top 10 of kickboxing for years, has a clear path to be in the number one spot for Glory Kickboxing as a Middleweight champion.

Bay Area spectators can check local venues for viewing as GLORY Collision 3 will not be airing on TV. Stream the event from anywhere in the world by purchasing access at www.gloryfights.com. 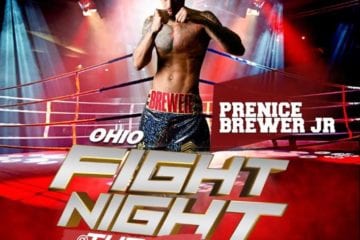 Prenice Brewer returns to ring May 11th in Ohio