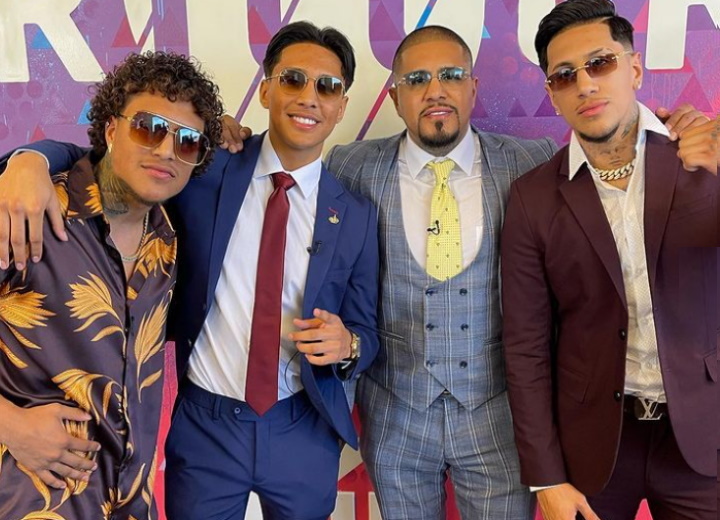 Fernando Vargas was a two-time junior middleweight world champion who competed against the very best during his career. At just 21 years of age, he became the youngest junior middleweight champion in the history of boxing. He dominated long time reigning champion Luis Ramon “Yuri Boy” Campas and forced him to quit in his corner in 1998. Vargas was the type of fighter that fight fans had to love. Before the age of 30 he had shared the ring with elite fighters such as Campas, Raul Marquez, Winky Wright, Ike Quartey, Felix Trinidad, Oscar De La Hoya, and Shane Mosley.

With his great career now behind him, he has shifted his attention to training his sons with all three of them now boxing professionally. All three of his sons will be fighting on Triller Fight Club’s card next Saturday, May 14th at the Forum in Inglewood, California.

His oldest son, Fernando Vargas Jr., is 25 years old and has made up for lost time after joining the sport late. He got into boxing at age 17 as he grew up playing other sports, most notably basketball. Though he started the sport later than most professionals, it was evident early on that Junior had the punching power and athleticism that could make him a very successful boxer. He competed in the 2019 U.S. Olympic Trial Qualifiers; and, after losing a controversial decision, decided with his father that they would turn to the professional ranks.

Finishing with a 36-4 record as an amateur, Vargas Jr. turned pro in December of 2020 and has won each of his first five fights via knockout. His most recent bout was on FOX in the lead-in to the Keith Thurman vs Mario Barrios PPV event in February. He defeated fellow undefeated prospect Kody Koboski with a third round TKO to improve to 5-0 with 5 KOs. Getting work in with numerous former world champions, including Yordenis Ugas, Shawn Porter, and Kell Brook has prepared Junior well for the pro game. Next weekend he is pinned against 3-0 Terrance Jarmon in a six-round contest on Triller. Junior hopes to make another statement by proving that he is a legit prospect at 154lbs.

Amado Vargas, like his older brother Fernando, played the more traditional sports growing up and did not turn to boxing until later. His favorite sport growing up was football, and he switched to boxing in his early teens. Amado compiled a 42-7 record as an amateur boxer, and was ranked as high as #5 by Team USA in the 114lb division. He has been victorious in all three of his professional contests, with two of them being knockout victories. He will face Anel Dudo in a four-round featherweight bout next weekend in his Triller debut. Dudo is only 1-3 as a professional boxer, but has experience competing in Muay Thai; he has never been knocked down or stopped in any of his boxing defeats.

This will serve as a solid measuring stick for Amado, as I expect Dudo to be awkward and try to do everything he can to survive the four-round duration. A stoppage victory on a platform like Triller would be a major statement for Amado, and would be a step in the right direction as he continues to progress as a professional. Already in his young career, Amado has sparred with world champions Shakur Stevenson and Gervonta Davis and hopes to use that experience to turn in a dominant performance next Saturday.

Emiliano Vargas is the youngest of the three brothers, and has the deepest pedigree in the sport. He started boxing as a young child and had the most success as an amateur out of all three brothers. Emiliano was a seven-time national champion as an amateur, and posted a stellar 110-10 record in the amateur ranks. Recently turning 18 years of age, the youngest Vargas brother set his sights on joining his two older brothers in the pros.

Making his pro debut on this card, he is set to square off against 1-1 Mark Salgado in a four-round lightweight contest. Salgado is coming off of a split decision loss, and will have his hands full next weekend as he welcomes the highly decorated amateur to the professional game. Given his early start and natural ability, many people believe that Emiliano has the highest potential of all the brothers. If he stays focused and dedicated, he could become a pound for pound star for this upcoming generation– the sky is the limit for this 18-year-old. Before even turning pro, he has gotten great sparring work in with Shakur Stevenson and Jamel Herring, which will clearly benefit him as he rises up the professional ranks.

The Vargas brothers will have to deal with the the pros and cons that come with having a father who was a world champion. They are going to get opportunities to shine because of their last name, but they will also be subjected to people minimizing their accomplishments because of their father. Fernando Vargas has been adamant that his sons are working as hard as they can to fulfill their potential. He has also made it widely known that if his kids were not performing at a high level, then he wouldn’t be pushing them the way he currently is. Because he has had all three of his sons sparring world champion level opposition early in their careers, it will only benefit them down the line.

“They all have talent” he stated in a past interview. “We’re in the hurt business, and I wouldn’t want them to get hurt. I’m not going to be putting my kids in something because I want to live through their eyes and experiences…. I’m not going to sacrifice my kids for money. That’s not me. My kids are my life. I didn’t have a father. When I’m living now through my kids’ eyes, it’s amazing. It’s a blessing to me.”

Triller Fight Club returns on May 14th as the Vargas Dynasty hopes to take the world by storm and pick up three victories in front of a world-wide audience. The card also includes former Light Heavyweight Champion Sergey Kovalev, former Heavyweight title challenger Kubrat Pulev, along with Evander Holyfield’s son Evan Holyfield all in separate bouts. The event is titled “Trillerverz 5” and will also feature a “Verzuz Battle” between rap groups Cypress Hill and Onyx. “Trillerverz 5” will be a Triller Fight Club PPV event that can be purchased on US platforms, such as fite.tv for $29.99.