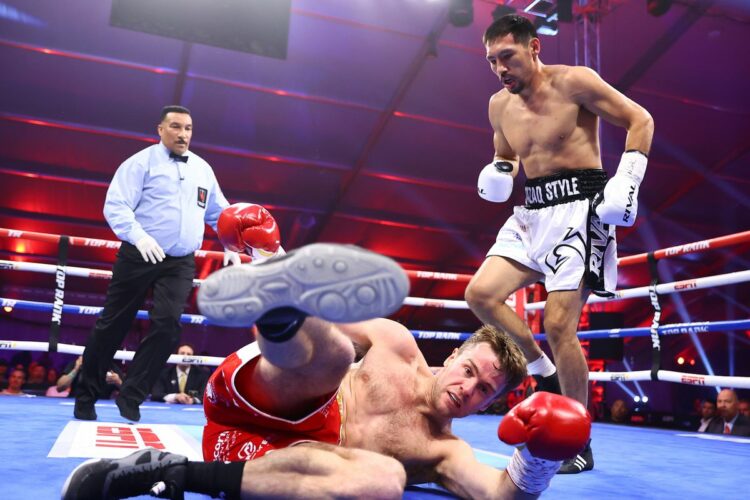 In a surgical performance, Janibek Alimkhanuly knocked Danny Dignum out in round two to become the interim WBO middleweight champ (whatever that means).

Janibek (12-0, 8 ko) is a bad boy, no doubt about it. But this was an obvious mismatch. Janibek was able to land combinations at will with little answer from Dignum in a similar fashion to Zurdo Ramirez’s fight against Dominic Boesel.

I think this is a guy who is a legitimate problem for anybody at middleweight. He throws fast, creative combinations and has the power to go with it, and on top of that he’s about 6’0” tall. In light of Gennady Golovkin turning 40 and being in the last chapter of his career, and both Jermall Charlo and Demetrius Andrade’s desire to up to 168, middleweight is very much a division that is up for grabs right now. At the moment, I think the most interesting fight for him at middleweight is probably Jaime Munguia, and it’s a matchup I’d love to see. I also think a fight between him and Erislandy Lara would be very intriguing considering both of their amateur pedigrees, and Lara’s boxing ability provides a different puzzle that Janibek has had to solve so far in his professional career.

On the undercard, Jamaine Ortiz (16-0-1, 8 ko) wins a unanimous decision over former jr. lightweight champion Jamel Herring (23-4, 11 ko). Ortiz was the younger more energetic fighter, as despite Herring’s efforts to go to the body and engage Ortiz, he just wasn’t sharp enough to keep pace Jamaine. Ortiz did a nice job of staying unpredictable by changing rhythm and pace, bouncing on his toes at times and muscling on the inside times. Herring, who has had a great career may be done at the top level while Ortiz looks like a guy on the way up.

Also on the card, Tiger Johnson looks spectacular in a 3rd round stoppage of Agustin Gerbaldo Kucharski, and Adam Lopez wins a drag out was against William Encarnacion.