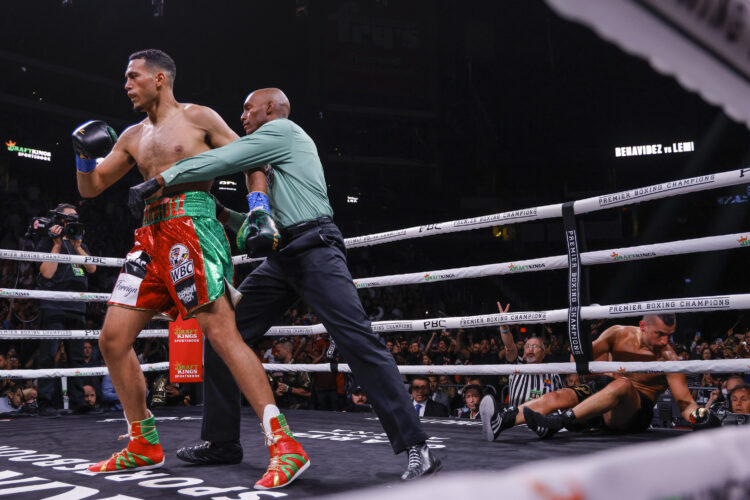 Links To Support US.

David Benavidez is now a three-division world champion as he stopped David Lemieux in three rounds. Benavidez, who is obviously one of the best super middleweights in the world, outclassed Lemieux, who looked hopeless without power that could affect Benavidez.

The bigger issue is – Benavidez needs a legacy fight. We see Benavidez as the second-best in the division, and only behind Canelo, but I would take a fight with Demetrius Andrade, David Morrell or Caleb Plant.

Much respect to David Lemieux for taking this fight. Let’s hope we see Benavidez against an equal in his next fight, but he needs someone to take a fight against him.

154 lbs Yoelvis Gomez got the first decision win of his career going 10-rounds against Jorge Cota in a ten-rounder.

Luis Nunez won a close fight in a barnburner against Jonathan Fierro to open up the telecast at 126 lbs.

Off-television, Victor Ortiz won his fight but was dropped in the tenth round, we hope to see him in a fight with Adrien Broner, as well as 140 lber Richardson Hitchins got a fourth-round KO, Micky Scala got a first-round KO,

Janibek Alimkhanuly handed Danny Dignum a one-sided beating and looks to be one of the future forces of the middleweight division. In what was a showcase bout, it was also for the vacant WBO middleweight title, which Janibek made the most of by simply outclassing Dignum, who had the unfortunate circumstance of being his opponent, who didn’t have the skills to compete with him.

The end resulted in a second round knockout, and the start of an era for Janibek, which should be at the forefront of.

Jamaine Ortiz defeated Jamel Herring, in what was Ortiz’s biggest win as a pro.

“Tiger” Johnson got a third-round KO over Agustin Kucharski, an awkward opponent, with a come-forward style. Johnson is progressing nicely.

Featherweight Adam Lopez got an eight-round decision over William Encarnacion as Lopez was dropped twice in the fight, but managed to win a slew of rounds to get the win.

130 lbs Karlos Balderas saw his two knockdowns of Ruben Cervera be the difference in his fight as Balderas dropped Cervera in rounds one and three, but had trouble in the later rounds.

Jessie Magdaleno got a stay-busy win as got a decision win. Magdaleno should be in a big fight, an interesting bout could be against Joet Gonzalez.

Duke Ragan got a four-round decision over Victorino Gonzalez.

Lightweight stud Charlie Sheehy is now 3-0, with 3 KOs, as he stopped Burnell Jenkins in the fourth round with mere seconds left in the fight.

In a surprising result, Kasir Goldston fought to a draw with Yaniel Alvarez.

Giovanni Cabrerra, who now trains out of the Wild Card Boxing Gym, won an eight-round decision.

Coming off a long lay-off, and mostly because of PED suspension as he was supposed to fight Badou Jack last year, but failed a drug test 39-year-old former two-time world champion #4 rated light heavyweight according to ITRBoxing.com, Jean Pascal (36-6-1, 20 KOs) beat IBF #1 light heavyweight Fanlong Meng (17-1, 10 KOs) by a 12-round decision in a thrilling fight on Friday night from the ProBox TV Events Center in Plant City, Florida.

Meng hurt Pascal early, most notably in the second round. Pascal continued to come forward with undeterred pressure. As Pascal is very vulnerable beats hits freakishly hard. Meng allowed Pascal to stay in the fight which was costly, as Pascal did what he always does and dropped Meng late in the fight in round nine. Once the power was felt, Meng never won a late-round after and lost on the cards.

We had the start of the “Last Chance” tournament pitting up fighters, who have several losses who might not get the chance to fight on cards without having to take on a fighter who has a massive advantage over them, either in terms of talent or the politics of the sport.

The most spectacular performance was Kendo Castañeda (18-5, 9 KOs) who got a first-round KO over Sonny Frederickson (21-6, 14 KOs).

The semi-finals will be Castañeda vs. Fernandez, and Dutchover vs. Moran.

My gut feeling tells me we’re headed for a Castaneda vs. Dutchover final.

A fun fight that most people probably missed. Joshua Buatsi is not unlike Karlos Balderas, except he has undefeated record. Buatsi was the talk of the 2016 Olympics, and now in 2022, we really need him to get busy.

Against Craig Richards, we saw him in with his first test, as a pro, and he passed, but not without issues. Buatsi is a solid fighter, a potential world champion, but he got a razor-tight decision over Richards, who may or may not go to the world level.

A great fight to watch, a cautionary one for history.

Chantelle Cameron got a 10-round decision win. Cameron seems a bit frustrated, she wanted to unify all the belts at 140 lbs against Kali Reis, but Reis appears to be unable to compete at the current moment, due to this Cameron has been inactive and out of sight, out of mind. Cameron seems very unhappy about her inactivity. I know one thing I am a fan of her style, as she is as mean they come in all of boxing.

Floyd Mayweather beat up “Dangerous” Don Moore in a fight in which Mayweather held up the ring cards, danced, and even talked to the announcers. I feel like no one realized this was happening.

Christopher Diaz won his fight in Florida. An Olympian I liked a lot, Alexy De la Cruz, fought on the card, and I couldn’t find the results.

James Metcalf defeated Kerman Lejarraga, which might spell the end of Lejarraga, who never could get a meaningful win.

Yorgan De Castro defeated former UFC champion Junior Dos Santos via shoulder injury in the third round in Eagle FC. Hector Lombard and Thiago Santos ended in a no-contest after an illegal knee from Santos ended the fight. 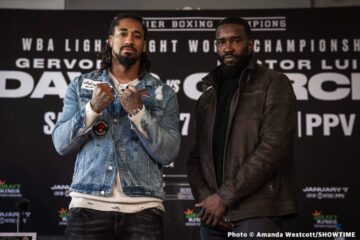