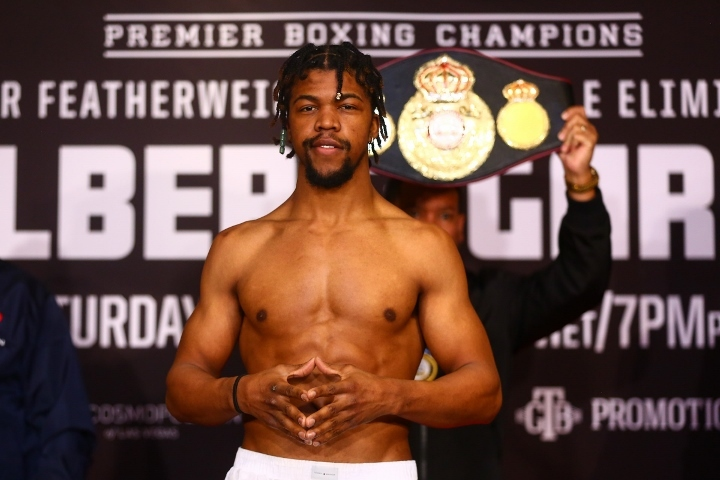 Heavyweights are our co-feature for this weekend. Adam Kownacki (20-2, 15 KOs, pictured first) was once a promising up and coming heavyweight, but after back to back stoppage losses to Robert Helenius he is in need of a bounce back performance. Demirezen (16-1, 12 KOs) knocked out longtime contender Gerald Washington on the New Year’s Day PPV card, and after a stay busy fight in Germany he is back in the states eager to pick up another quality victory. Both guys have crowd pleasing styles, so this fight should be entertaining for as long as it lasts. The winner of this matchup will go on to bigger and better things in the heavyweight division. Both fighters are going to look to get off to fast starts, and whoever is able to keep the same pace they began with in the back half of the fight will probably come out victorious.

The youngest of the three fighting Russell brothers, Gary Antuanne (15-0, 15 KOs), hopes to continue his rise to the top of the 140lb division. After becoming the first man to stop former WBC champion Viktor Postol in February, he has the opportunity to share the ring with another high level opponent who will be hard to figure out. Rances Barthelemy (29-1-1, 15 KOs) has been a world champion in two different divisions, and shares many of the qualities that his fellow Cuban boxers possess. He is someone who is very frustrating to be opposite of in the ring and Russell will have to figure things out on the fly when they are in the ring. If Russell is able to break down Barthelemy, it would be a great sign in the development in his career, and I would be confident matching him with anyone at 140lbs that PBC has to offer. Gary Antuanne will have his older brother, Gary Russell Jr, in his corner for the first time in his career. This is the first fight for any of the three Russell brothers without their father Gary Sr., and Gary Antuanne has said that has helped him push even harder to achieve the goals that he has set for himself. The Russell family has always been a genuine boxing family, and after everything that has transpired over the last couple years it has became even easier to root for the success of all three brothers. Gary Antuanne in my opinion is the most underrated boxer in the sport today, and there should be an abundance of opportunities to prove himself if he continues on this run.

Former middleweight title challenger Sergiy Derevyanchenko (13-4, 10 KOs) will face off against Joshua Conley (17-3-1, 11 KOs) in an undercard bout. Derevyanchenko is one of the best fighters of this generation to not become a world champion. He has had three title opportunities against great champions, those being Daniel Jacobs, Gennady Golovkin and Jermall Charlo. Against Jacobs and Golovkin, Derevyanchenko made a decent case that he did enough to become champion. He comes into this matchup the favorite, as Conley’s professional victories have been against lesser competition than Derevyanchenko’s. With a victory, Derevyanchenko looks to get one more shot at the elite level. He and his team have been vocal about wanting a matchup with Jaime Munguia, and if he is in fact victorious then we will see if Golden Boy can make that fight as it would be beneficial for both fighters at this stage of their careers.

Vito Mielnicki Jr (11-1, 7 KOs) returns this weekend against tough veteran Jimmy Williams (18-8-2, 6 KOs). Williams showed in his last outing against Luis Arias that he still comes to fight, but I believe that Vito should be able to get the job done. This fight will give Mielnicki some solid rounds against a game opponent before he continues to move up the ranks.

Junior Younan (16-0-1, 10 KOs), a Brooklyn native, gets a hometown opportunity this weekend on the undercard leading up to the Showtime broadcast. Dauren Yeleussinov (10-1-1, 9 KOs), is a Kazak fighter who did not turn pro until he was 28. Being 36 years old it is a now or never situation in regards to him getting a big time opportunity. I favor Younan to get the victory in front of his home crowd, but outside of the heavyweight co-main this is the hardest fight for me to predict as either guy could get the job done.

An intriguing undercard matchup that features two undefeated fighters who hope that an impressive performance can land them a spot on another Showtime card against quality opposition. LeShawn Rodriguez (13-0, 10 KOs) will be opposite Ismael Villarreal (11-0, 7 KOs) in an eight round 154lb contest. Rodriguez has faced a higher level of opposition as a pro and has a deeper amateur background. I favor Rodriguez to get the job done, but this should be a competitive affair. If you are attending the fights this weekend, I recommend getting there early to check it out.