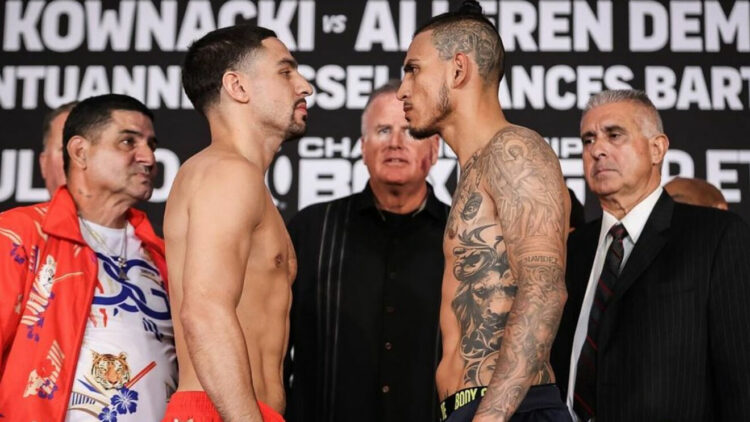 Two-division world champion Danny Garcia and former title challenger Jose Benavidez Jr. met in the Showtime Championship Boxing main event at the Barclays Center in Brooklyn, New York. The first few rounds were competitive; it was the activity of Benavidez against the counterpunching of Danny Garcia. Garcia looked to the body of the bigger Benavidez early and landed 29 body shots in the first three rounds. Danny Garcia had mentioned before the fight how he felt that his jab was going to be the key to him being successful at 154lbs, and he did a great job setting the rhythm by using the jab to the head and body of Benavidez. The defense of Garcia got sharper as the fight progressed, as Benavidez was not able to find openings and use his hand speed to his advantage. Benavidez did some solid combination work in the ninth round, but Garcia never let him get enough momentum to change the course of the fight and closed the show by winning the last three rounds. Getting the victory in his debut at 154lbs, Danny Garcia improves to 37-3, while Jose Benavidez Jr falls to 27-2-1. Danny has hopes of becoming a three-division world champion, and a fight with former WBC 154lb champion Tony Harrison would be a great step in that direction. Both fighters are friendly with each other, but have expressed interest in matching up, and it is an easy fight to make since both guys are signed with the PBC.

Adam Kownacki and Ali Eren Demirezen were expected to please the crowd when they stepped into the ring this weekend, and they did exactly that. Kownacki controlled the first two rounds with his combination work, but Demirezen had more success in the middle rounds as Kownacki’s output slowed down. Kownacki had success in spurts, but Demirezen was able to land enough straight right hands to keep him at bay. Kownacki had a moment in round ten, but Demirezen rallied to finish the round out strong and did enough to earn a unanimous decision victory. Demirezen should get another high level opportunity in the heavyweight division in the near future with tonight’s impressive performance. He is now 17-1 as a pro, whereas Kownacki is now 20-3, with his third straight defeat.

Gary Antuanne Russell faced a bit of adversity early for the first time in professional career. He was hit on the chin with a hard right hand by Rances Barthelemy but showed the wherewithal by staying composed. Barthelemy put up solid resistance and gave the youngest Russell a stiff test throughout the first five rounds. A lead right hook from Russell at the beginning of round six dropped Barthelemy to the canvas and had him hurt. Though he appeared to be fine to continue, the referee waived off the fight much to the dismay of the Barthelemy corner. Russell was winning on all three scorecards and with the knockdown in round six appeared to be in full control of the fight. I can understand why Barthelemy and his corner were unhappy with the stoppage because he got to his feet and has been able to recover from knockdowns previously in his career. Nonetheless, Russell picks up the impressive victory and is as good as advertised in the 140lb division. He is now 16-0 with 16 stoppage victories as a pro, and Barthelemy drops to 29-2-1.

“The Technician” Sergiy Derevyanchenko fought the last fight before the official Showtime Boxing broadcast opened up tonight. He was able to outwork his opponent Joshua Conley over the ten round duration and picked up the wide unanimous decision victory. With the win, Derevyanchenko keeps his hopes alive for another high level opportunity at 160lbs, and is now 14-4 as a professional. Joshua Conley falls to 17-4-1 with the defeat.

Vito Mielnicki Jr. opened up the YouTube broadcast as he squared off against rugged journeyman Jimmy Williams. Vito did what many wanted to see him do, as he was able to break down the tough Williams. Despite his record, Williams comes to fight and is hard to knock out. With the sixth round TKO victory, Mielnicki boosts his record to 12-1 with 8 knockouts, while Williams is now 18-9-2.

Junior Younan was able to live up to the pressure of fighting in his hometown of Brooklyn, New York. In a fight that was hard to predict going in, Younan left no questions in the ring and he was able to pick up the first round stoppage victory. Younan improves to 17-0-1 with 11 knockouts, while Dauren Yeleussinov falls to 10-2-1.

In a battle between fellow New Yorkers, Ismael Villarreal made a statement and picked up the best victory of his professional career. He was able to wear down LeShawn Rodriguez, who was the favorite coming into this bout, as he dropped him twice on route to a sixth round stoppage victory. Villarreal improves to 12-0 with 8 knockouts, and Rodriguez picks up his first professional defeat as he drops to 13-1.