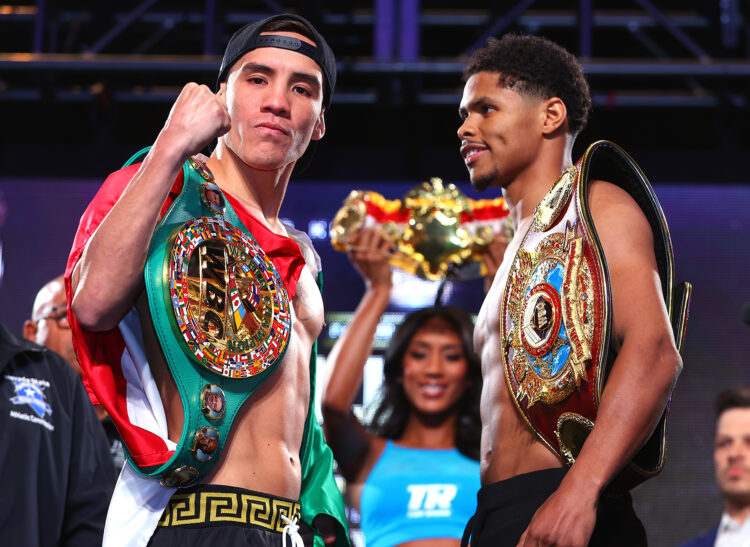 It is pretty clear Shakur Stevenson looks to be the leader of the next generation of young fighters, as of now.

If you told me Shakur Stevenson is the best fighter in the world, I probably wouldn’t argue with you, but I am not sure I would agree, as accomplishment should mean something even if fighters are past their prime.

Most of Stevenson’s major wins will just continue to get better. Joet Gonzalez is a world-class fighter, who is just now starting to get the respect he deserves as Shakur Stevenson beat Gonzalez to win his first world title, Gonzalez’s peak of confidence. Oscar Valdez is a modern legend coming off the biggest win of his career against Miguel Berchelt, Stevenson beat him. Jamel Herring and Jeremia Nakathila will probably never get the credit for the issues that they brought to the ring, as Herring brought a high in-ring IQ, and Nakathila his power. Plus he holds a win over Toka Kahn Clary, an old Top Rank signee who could upset a prospect in the next few years.

The resume is solid, and Stevenson is young.

For a fighter holding world titles in two divisions, at only 18 fights in his career, Stevenson has about as good of a resume as you could have, at least in the modern era of boxing.

Based on the eye test, he seems to be the guy, and quite possibly could be on his way to winning fighter of the year depending on how the end of this year shapes out. The product of  Wali Moses, the most underrated boxing coach in the sport of boxing, Stevenson is a master tactician, who is in love with the sport, which seems to be where a lot of his greatness stems from.

Last Monday, it was announced Stevenson is returning to Newark, New Jersey, this time as a champion taking on Olympic gold medalist Robson Conceicao. Conceicao is best known for giving Oscar Valdez all he could handle as many felt he beat the world champion, and Conceicao rebounded by defeating our Northern California guy Xavier Martinez early this year.

The bout scheduled for September 23rd, at the Prudential Center in Newark, New Jersey, could be the moment we look at Stevenson and see an evolution from a good fighter to ascending to star status in the sport, as now he heads home as an undefeated two-weight world champion looking to face a game foe, who is not even being given a shot, based on the odds, which speaks to how highly we rate Shakur Stevenson.

We often contextualize what fighters say, but never listen. Here is what Stevenson said at his homecoming press conference.

If this was against any other fighter, Conceicao would be considered a live-dog, but we consider Shakur Stevenson so great, that Conceicao a top-5 130 lber, is looked at as most as cannon fodder. When looking at the other world champions, Roger Gutierrez who fights Hector Luis Garica soon, and a smart man would assume if Garcia wins would target either Gary Russell Jr., or Leo Santa Cruz not Stevenson. Add to the fact that Joe Cordina, a champion in the U.K., stands no chance either. Though I would like to see Stevenson become undisputed, I feel his dominance is so much, that pretty much everyone views him as undisputed without being undisputed based on what he has displayed against Oscar Valdez.

As you look on his Twitter feed you can see him studying fights, when you get behind the scenes looks via videos or other content to see what Stevenson is doing – he is watching fights. Shakur Stevenson is obsessed with greatness, and with less than twenty fights is pretty safe to say he will safely be a staple in the top ten of the pound-for-pound for now until he call it quits, as he Stevenson will only garner more accolades and accomplishments to bypass inactivity greats en route to what seems destined, Stevenson being the pound-for-pound #1 fighter in the next two-to-three years.

Stevenson’s journey is still rather unknown. The next great fighter out of New Jersey, who was signed by hall-of-fame boxing manager James Prince right out of the Olympics. Stevenson is a class of his own as Jaron Ennis and Stevenson to me, look to be the two fighters carrying the sport into the 2030’s barring an unforeseen tragedy.

What makes Stevenson so great, is the distance control of a Cuban boxer which many give the comparison to Floyd Mayweather, I see the later Floyd in Stevenson’s style, and judging by his age, that is probably the Floyd he watched the most. The other is Pernell Whittaker.

It is painstakingly obvious, that Whittaker served as a major inspiration for Stevenson sans the flashy moves, as a lot of his pivots, angels and deceptive feints feel like a modern remix of one of the best fighters ever. Then add in the strong-will power of another influence he has had, Andre Ward. What you get is a fighter destined to achieve, and more so Perceiver.

Shakur Stevenson is a living embodiment of a created player in a video game with the best attributes of the best fighters in the game, and he is continuing to hit his prime.

Beyond all of that, Stevenson is addicted to fighting. It isn’t a job, you see how much he loves to fight and wants to fight. Now comes the transition, Stevenson fights are becoming events – as he gears up to the inevitable move to lightweight, which will lead to him entering the top-five in the pound-for-pound rankings, we look forward to seeing him face his true equals in the Gervonta Davis, Devin Haney, and others.

For me, Haney is the only fighter I see currently, mentally that can match the intensity and desire of Shakur as that is hopefully a fight we get down the line, as a fight that creates the next fighter who crosses into pop-culture stardom.

The question is, will fans be drawn to dominance in boxing?

This is the era of superficial over substance. What used to be called a model or an attractive person is now called an influencer, and that is more coveted than talent. You can simply now be desirable in some manner void of talent, and be more sought after than an industry leader if in the right place and time. This is what Andre Ward struggled with being a fighter with so much substance in a 15-second world, that wanted things explained quickly, his greatness was not accepted or understood until he left. Imagine people trying to convey thoughts on books with 800 pages, when people now struggle with one paragraph.

Can Stevenson be the best fighter in the world and one of the most marquee fighters at the same time? That is the multi-million dollar question, and I would like to believe the answer is yes. Stevenson is still a young guy and finding himself, he is growing up in the public eye, how long will it take for the weekend warriors who buy and consume this sport to follow him?

The over next few years we have a few good fights already for Stevenson to look forward to as a potential hall-of-famer clash between a fighter who is slowly becoming a Mexican boxing legend in Emanuel Navaratte is lurking a weight below him currently and would offer a new challenge, one of sheer pressure and burning desire to win, which could make some observers look to Mayweather vs. Castillo I, as well as a first-ballot hall-off-famer Vasyl Lomachenko. I know it is a pipedream, and Conceicao is one tough dude, but imagine if we could somehow see one of these fights in January or February of next year? – With Stevenson, not unlike Devin Haney, anything is possible as he wants to fight the best, and as a fan those are the guy you have to like.

We’re leaving the era of just waiting too long for fights, at times Danny Garcia made us wait too long, Keith Thurman definitely did, Gennadiy Golovkin for better or for worse did once he had his run, and Ryan Garcia is still making us wait. Guys like Shakur Stevenson are a purist’s delight. They relish the chance at boxing immortality, they want the challenges, and that grants us, good evenings on Fridays and Saturdays, which is what we want. With one of the strongest systems behind him from his management to promoter, Stevenson will have the backing to force fights as it looks like ESPN is trying to build a lot of their future around him, Mikaela Mayer, and Xander Zayas.

I know I annoy people, but I have always believed in Stevenson, based on the tools he holds – elite distance control, crazy work ethic, consumed with greatness, mean,ness and constantly evolving and improving.

As a youth skateboarding, I used to watch these quarterly skateboard video magazines called 411 video magazine, a company named Alien Workshop, had a highly sought-after video “Photosynthesis” come out, in the marquee launch trailer it went from an early rendition of Adobe After Effects spelling out “The Time Is Now” to “The Time Is Here”. I say that to say, I think that this fight and all of his fights moving forward for Stevenson from this point on mark the point in which he becomes when of the fighters who carry the sport forward.

Stevenson is no longer the future of boxing, Stevenson is the present, as the older fighters begin to retire, not fight as much or lose – Stevenson will become the mainstay of marquee main event attraction boxing.