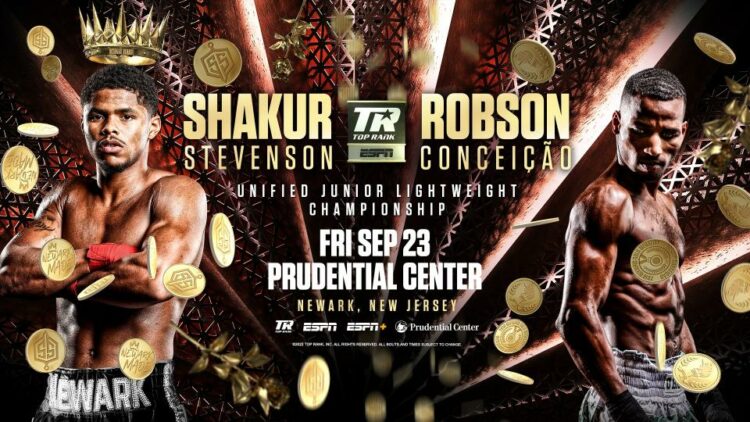 Ring Magazine and Unified Junior Lightweight Champion Shakur Stevenson (18-0, 9 KOs) returns home as he headlines this Friday night’s event at the Prudential Center in his hometown of Newark, New Jersey. Fresh off his dominant performance over Oscar Valdez (30-1, 23 KOs) to unify the 130lb division, Stevenson hopes to impress during his homecoming against another top level opponent. This Friday he will share the ring with Robson Conceicao (17-1, 8 KOs), a 2016 Olympic gold medalist who could be the stiffest test so far in the career of Stevenson.

Conceicao last fought in January of this year, when he outpointed then undefeated Xavier Martinez (18-1, 12 KOs). Conceicao is most known for his performance against Oscar Valdez in September of 2021. Conceicao dominated the early rounds of the fight, but Valdez made the fight competitive in the back half and ended up winning a very controversial unanimous decision. Being an Olympic gold medalist and coming off of two impressive performances, Conceicao is looking to push Stevenson more than anyone else has been able to thus far in his career.

Stevenson has been dominant during his run so far at 130lbs. He defeated the two highest rated champions in the division back to back in commanding fashion. After TKO’ing Jamel Herring (23-4, 11 KOs) in the tenth round to become the WBO junior lightweight champion, he went on and unified the division by defeating Oscar Valdez by a wide, unanimous decision to become not only the WBO and WBC champion, but also the Ring Magazine champion. Stevenson was able to defeat both of the reigning champions while unanimously losing only one of the twenty-one completed rounds in those two contests, a stat that shows at only 25 years of age Stevenson is as talented and dominant as anyone in the entire sport. Conceicao possess a tricky style, and I think that the first few rounds will be a give and take with each fighter reading his opponent and picking the moments to attack. As the rounds go on, I expect Stevenson to catch on to the tendencies of his opponent and begin to make him pay more and more. I anticipate a Shakur victory on points, but a stoppage over a guy like Conceicao would be a major statement and please his hometown crowd.

The future of Top Rank Boxing will be on full display Friday night as there is a slew of young talent on the undercard. Keyshawn “The Businessman” Davis (5-0, 4 KOs) will be the co-feature of the evening and he looks to have another impressive performance. He is continuing on his fast track toward a world title, as he will be opposite a veteran of thirty professional fights in Omar Tienda (25-5, 18 KOs). Tienda has only been stopped once in his five defeats, and hopes to get the lesser experienced Davis into the later rounds. Though Tienda has proven to be tough and knows how to survive when hurt, I believe that Keyshawn will be able to break down the veteran and eventually earn an impressive stoppage victory.

Top Rank is said by many to be the best in the game at matchmaking their prospects. They do a great job of putting their young fighters in with opponents that will push them and help them learn on the job. Henry Lebron (16-0, 10 KOs) is in a very intriguing matchup as he is pitted against junior lightweight contender Andy Vences (23-3-1). Vences has only lost to legit contenders at the 130lb division, and all of those losses have come in competitive affairs. Lebron is favored to get the victory, but I expect this to be a highly contested bout over the eight round duration. If Lebron passes this test with flying colors, it will most certainly serve him well going forward as he looks toward a world title opportunity.

Bruce “Shu Shu” Carrington (4-0, 3 KOs) is a prospect who has certainly been getting a lot of attention recently around Top Rank. He will be facing the best opponent of his career to date in Chilean veteran Jose Argel (9-4, 3 KOs). Jahi Tucker (8-0, 5 KOs) is also featured in a step up fight as the nineteen year old prospect faces a quality opponent in his early career. His opponent is Jose Luis Sanchez (11-2-1), who drew with longtime welterweight contender Adrian Granados (21-9-3) and went the distance with highly touted prospect Xander Zayas (14-0, 10 KOs) in his last two outings.

Two other notable matchups on this weekend’s undercard include Puerto Rican featherweight contender Orlando Gonzalez (18-1, 11 KOs) and the popular up and comer Floyd “Cashflow” Diaz (6-0, 2 KOs). Gonzalez’s only defeat came at the hands of the highly talented 2x Olympic Gold Medalist Robeisy Ramirez (10-1, 6 KOs), and he looks to pick up a second straight victory against Misael Lopez (13-1, 5 KOs). Diaz came into the spotlight when he was featured in All Access videos at the Mayweather Boxing Gym as a young kid. He is paired with a fellow undefeated fighter this Friday in Eduardo Diogo (3-0, 2 KOs). Both fighters are early in their pro careers, but Diaz has a much deeper pedigree and should be able to hand his opponent his first professional defeat in a convincing fashion.

This special Friday night of Top Rank Boxing will be presented on the ESPN platforms. The undercard will begin on ESPN+ at 6:00pm ET, and that is where you will be able to watch the majority of the fights on the card. At 10:00pm ET, the broadcast will switch over to ESPN. Keyshawn Davis vs Omar Tienda is the first fight on the main card, and then the highly anticipated main event is Shakur Stevenson vs Robson Conceicao for the unified world junior lightweight title.