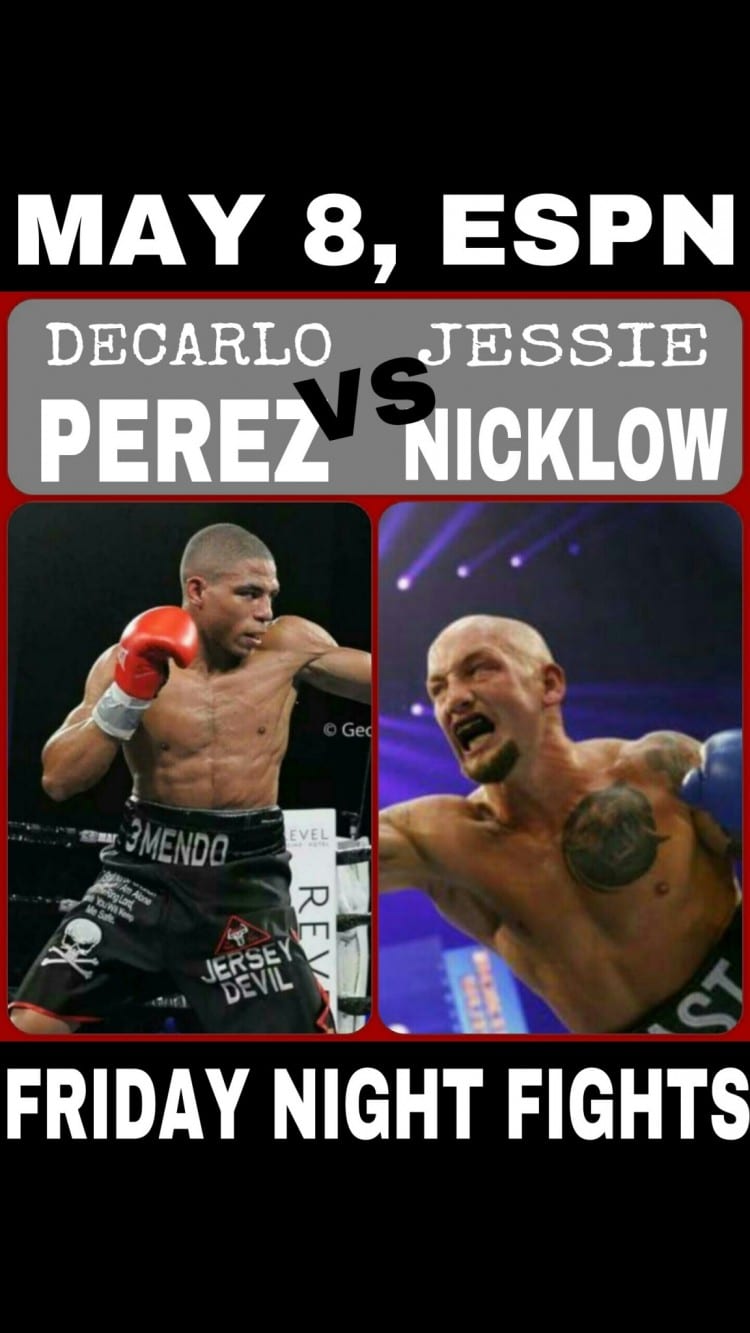 Middleweight prospect DeCarlo Perez, of Atlantic City, NJ, gets another tough test when he takes on rugged Jessie Nicklow, of Baltimore, MD, in the scheduled eight-round semifinal on Friday evening, May 8, at the 2300 Arena.

Topping the seven-bout card is the 10-round heavyweight showdown between Amir “Hard Core” Mansour, of Wilmington, DE, and Joey “The Tank” Dawejko, of Philadelphia.  ESPN 2 will televise the show, beginning at 9pm (EST).  First prelim goes off at 7 pm.

Perez, 24, has had few soft touches since turning pro in the summer of 2010.  His 13-3-1 record includes five knockouts.  He has won seven of his last eight fights, and the combined record of those eight opponents was an imposing 102-20-9 with 60 knockouts.  His only setback in that streak was via eight-round split decision to world-rated Wilky Campfort, of Fort Lauderdale.

In his last fight Oct. 18 at the 2300 Arena, Perez stopped Tyrone Brunson, of Philadelphia, in five rounds.  Perez is ranked No. 6 by the United States Boxing Association.

“I am very excited to be fighting Jessie Nicklow,” Perez said.  “He is a tough opponent with 25 wins and he has been in with world champion Jermain Taylor.  Team Perez is ready for the challenge and the opportunity to show the fans what we can do.

“The fact that Jessie is tough and experienced has me working hard but not worried.  We have been fighting tough our entire career.  Fortunately, the world will get to see what the local boxing community already knows. We are ready.”

The only foe common to both Nicklow and Perez is Julius Kennedy, of Baltimore, who boxed a 10-round draw with Nicklow in 2010, three years before he was stooped in five rounds by Perez.

“I don’t really have a lot to say about this coming fight with Perez,” Nicklow said.  “I will have had seven weeks of training to fight a 13-3 guy.  I work a full-time job for Scaffold Resource.  I have two dogs, a cat and a little brother to take care of.

“I train like every fight is going to be my last because I know what I’m willing to risk to win.  My only game plan is the same as every fight and that’s to punch him in the face.”