The “Championship Boxing on CBS Sports Network” event on Friday, April 17, from the Grand Casino Hinckley in Hinckley, Minnesota, is taking shape.

Tickets for “Championship Boxing on CBS Sports Network” start at $35 and can be purchased at the Grand Casino Hinckley Box Office from 8 am to 10 pm (1-800-GRAND21) or at all Ticketmaster outlets, or online at www.ticketmaster.com.

30-year-old Tyron Brunson holds the boxing record for consecutive first-round knockouts with 19. The previous record was held by former world champion Edwin Valero. As an amateur, Brunson won the youth tournament Silver Gloves and the Pennsylvania State Golden Gloves. His amateur record was 82-12.

27-year-old Tony Luis, from Cornwall, Ontario, is enjoying an amazing 2015 thus far. In January, Luis pulled off a dominant 10-round unanimous-decision upset victory over then IBF #15 rated Karl “Dynamite” Dargan. Then on February 20, he and fiancé Manon Latulippe welcomed the birth of their first child, a son named Miguel. Luis is rated #11 in the world by the WBA and #14 by the IBF.

24-year-old Rob Brant was a heavily decorated amateur boxer before turning professional in 2012. After starting boxing at age 16 in 2007, just two years later, Brant went on to win the 2009 and 2010 National Golden Gloves, as well as the 2010 Upper Midwest Golden Gloves. Brant was also the 2009 USA National Champion and a 2008 Platinum Gloves Runner Up. As a professional, Brant trains with fellow Minnesota native and upcoming world-title challenger Caleb Truax at the Minnesota Top Team Eagan facility.

“This superb card will get the CBS Sports Network series off to a tremendous start and I’m happy we were able to put it together,” said Greg Cohen of Greg Cohen Promotions. “Dennis Hogan is a future star in boxing and what better way to introduce him to the United States and the world than to have him face a deadly puncher such as Tyrone Brunson? Tony Luis will be defending his championship and we’ve got Minnesota’s boxing prodigy, Rob Brant in the opener. I want to thank all the tremendous team at the Grand Casino Hinckley for their tremendous support and we look forward to a groundbreaking world-class event.”

The live broadcast of “Championship Boxing on CBS Sports Network” will begin at 10:00 PM, ET. On fight night, the doors will open at 6 pm and the action starts at 7 pm. The Grand Casino Hinckley is located at 777 Lady Luck Drive in Hinckley, Minnesota. For more information, visit www.grandcasinomn.com or call 800-472-6321.

Founder and CEO Greg Cohen has been involved with professional boxing in various capacities since the late 1980s, honing his craft and establishing himself as a shrewd international boxing businessman.

Distinguished by his ability to spot and develop raw talent, Cohen made headlines for his expert guidance of, among many others, former WBA Junior Middleweight Champion Austin “No Doubt” Trout, who Cohen helped guide from unknown New Mexico prospect to elite pay-per-view level superstar.

Greg Cohen Promotions has hosted world-class boxing events in the finest venues throughout the United States and the world and has also proudly provided talent and/or content for several television networks including HBO, Showtime, ESPN, NBC Sports Network, MSG and FOX Sports Net.

Amir Mansour "He’s hiding his chin, they’re supposed to tell him to shave it. The beards gotta go!" 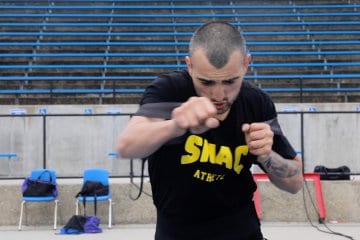