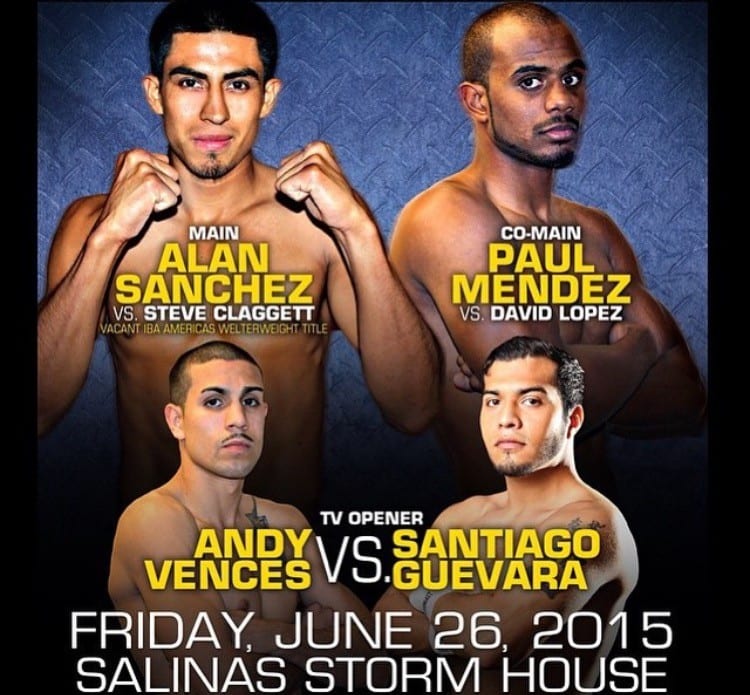 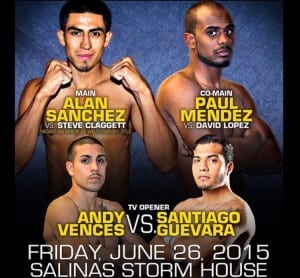 The Fox Sports 1 broadcast of Golden Boy Live will take place at The Storm House in Salinas, CA with Alan Sanchez (15-3-1 8KOs) of Fairfield, CA taking on Steve Claggett (21-3-1 14KOs) of Calgary, Alberta, Canada for IBA Americas welterweight title. The bout is a very good contest between two fighters at the same level and same spot in the  welterweight division who are flirting with getting a major fight.

The co-main event will feature the Salinas transplant, Paul Mendez (17-2-2 8KOs), who trains with the Garcia’s in the aforementioned town, taking on David Lopez (41-15-1 23KOs). The fight will be a reintroduction for Mendez to general TV audience as his last major outing was against Louis Rose that ended in a draw.

Oscar Godoy (13-4 6KOs) of Watsonville, CA will also be featured on the un-televised undercard. Godoy’s bout is close to be signed against a widely respected Bay Area boxer, but that particular fight is not official yet. Heavyweight Josue Lugo (debut) of Salinas, CA will take on Andrew Tinae (0-3) of San Ardo, CA. Super lightweight Oscar Rojas (0-2) of Salinas, CA will also be featured on the card as well.