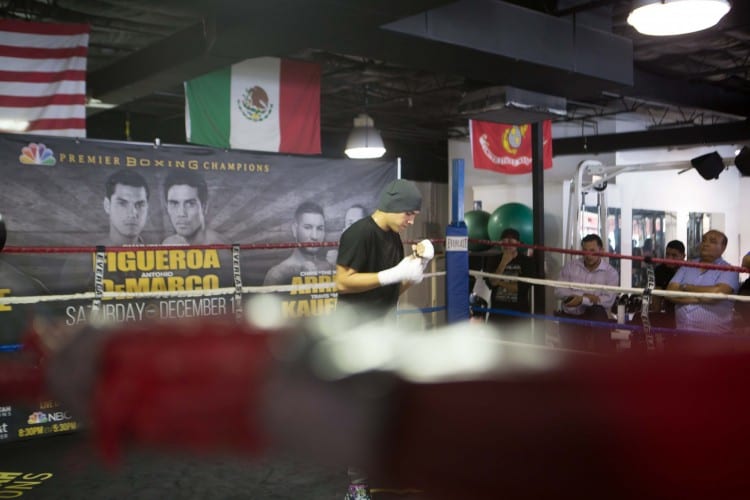 Omar Figueroa shadow boxing photo: Julius Morgan
Omar “Panterita” Figueroa (26-0-1, 18 KOs) won got the  decision over Antonio DeMarco (31-6-1, 23 KOs) on Saturday night at the newly renovated AT&T Center in San Antonio, Texas, but had to suffer some war wounds to do so. Figueroa took it to DeMarco early by blitzing the naturally smaller man, but found himself getting hurt by DeMarco late in the fight and seemingly the worse for wear at the final bell. In the end the judges scored the bout 116-112 and 115-113 two times.
Heavyweight Chris “The Nightmare” Arreola (37-4-1, 31 KOs) won a hotly debated split decision Travis “My Time” Kauffman (30-2, 22 KOs) in the co-main event of the NBC portion of the broadcast . Arreola came out wild and sloppy looking to catch Kauffman, but ended up catching the canvas in the third round. In the middle point of the bout, it became a bit tedious as it appeared both men gassed and when Arreola was hit low, he took the full five minutes allowed which seemed to be also for conditioning. Most pundits scored the bout for Kauffman, but the judges had it different as one judge had it 114-113 for Kaufman, while two judges saw it 114-113 for Arreola.

Victor Ortiz (31-5-2, 24 KOs) scored a technical stoppage over Gilberto Sanchez Leon (33-14-2) after handing out a one-sided beating Leon’s corner stopped the fight at the end of the eighth round. This was Ortiz’s second fight with trainer, Joel Diaz.

Junior lightweight Mario Barrios (14-0, 8 KOs) scored a sixth round knockout over Manuel Vides (18-5, 11 KOs). Barrios put him away with a straight right followed with a left hook on the button.