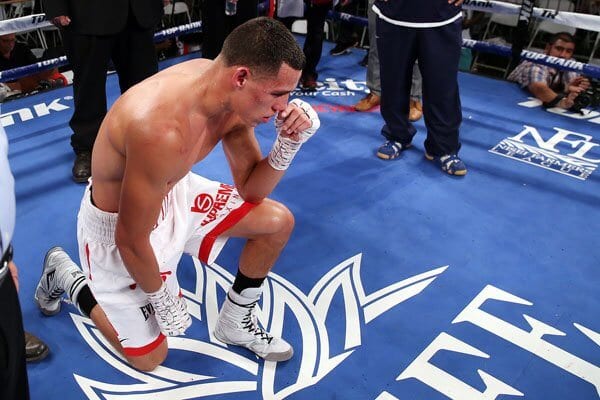 Heavyweight Andy Ruiz (27-0, 17 KOs) scored a ten round unanimous decision over Franklin Lawrence (21-3-2, 16 KOs) on Saturday night before a sold out crowd of over 3,000 outdoors at the Tachi Palace Hotel & Casino in Lemoore, California. Ruiz got a workman like decision as he fought a ten tough rounds, despite controlling the actions.

Fresno, CA welterweight Saul Lomas (9-0, 6 KOs) knocked out Joshua Joseph (5-3, 3 KOs) with a left hook in the the third round that left him motionless.

Lightweight Ray Beltran (30-7-1, 18 KOs) picked up a stoppage win over Miguel Mendoza (22-9-2, 21 KOs) with a fifth round knockout. Rumors are that Beltran may ended up on the Manny Pacquiao vs. Jessie Vargas undercard.

Welterweight Ector Madera (2-0 2KO) got a first round KO over Alfonso Flores (0-2-1) in a bizarre fight in which Flores excessively acted as though he was fouled for the majority of the bout before the KO. Madera and Flores got into at the weigh-in the day before.

Middleweight Quilisto “Kilo the Kid” Madera (4-0 2KOs) took some damage early to stop a very experienced foe in the second bout of the night against Cameron Rivera (7-4-1 5KOs).

Bantamweight Brent Venegas III (2-0 1KO) looked stellar in the opening bout against Yezber Romero (2-3 1KO) as he outboxed a game foe in his second bout.

Bryan Lua was suppose to be on the card, but his opponent pulled out last minute scrapping last minute.