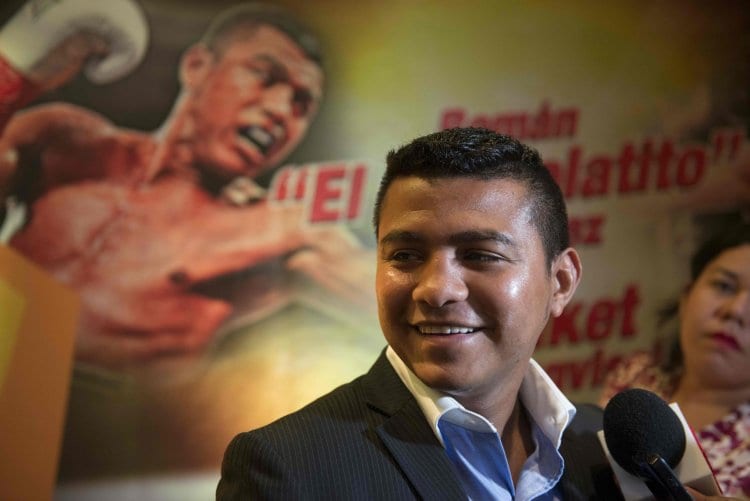 Photo: Carlos Alfaro Leon
One of the best fighters in the world and World Boxing Council (WBC) Super Flyweight Champion ROMAN “CHOCOLATITO” GONZALEZ, (46-0-0, 38 KO’s), held court in front of a huge crowd of Nicaraguan media before heading to Costa Rica for training camp in preparations to defend his title against Mandatory Challenger SRISAKET SOR RUNGVISAI (41-4-1, (38 KO’s) of Si Sa Ket, Thailand, on Saturday, March 18, 2017, at “The Mecca of Boxing”, Madison Square Garden.
Gonzalez is one of the country’s most popular figures, having been mentored by Nicaraguan boxing legend, the late ALEXIS ARGUELLO. In his last fight, a brilliant 12-round decision over CARLOS CUADRAS on September 10 at The Fabulous Forum in Los Angeles and telecast on HBO, Gonzalez became a fourth divisional world champion, the first in the Nicaragua’s history.
Gonzalez was joined at the press conference by his manager, CARLOS BLANDON.
ROMAN “CHOCOLATITO” GONZALEZ
“Sor Rungvisai is a fighter very tough fighter who wants my title. His fighting style suits me however I have to be careful because of his power.”
“I have all the tools to beat him. He has power but not much else but I also have to watch for possible head-butts.”
“Training in Costa Rica is very good for me. I’ve never liked the cold and right now it’s too cold in Big Bear.”
“I have no problem giving Carlos Cuadras a rematch but right now my focus is on Sor Rungvisai who is my mandatory for the WBC.”
“I have the perfect game plan and on March 18 there will be no surprises. I’m leaving Monday, we had a great camp in Costa Rica for the McWilliams Arroyo fight and we are planning to have another great camp for this fight there.”
“I feel very confident that I will be victorious for my fans here in Nicaragua and all over the world, those watching on HBO Pay-Per-View and those in attendance in Madison Square Garden. I loved fighting in New York City last time and look forward to March 18 when I return.”
“With the passing of my longtime trainer Arnulfo Obando, my head trainer will now be my father Luis Gonzalez and also in my corner will be Wilmer Hernandez. They were both assistants to Arnulfo throughout my career.”
CARLOS BLANDON
“We are very excited to start training in Costa Rica on Monday (January 23). Hopefully we will have the same excellent result we did when we trained there for McWilliams Arroyo.”
“Right now it’s snowing and cold in Big Bear and we feel it’s better for Roman to train in Costa Rica where it is warmer, although in Big Bear was where Roman had one of his best training camps before the Carlos Cuadras fight.”
“I expect that with the proper preparations in training camp that we will see an explosive fight and another great victory for Roman on March 18.”
Chocolatito vs. Rungvisai will be the co-feature to the World Middleweight Championship between Unified Middleweight World Champion GENNADY “GGG” GOLOVKIN, (36-0-0, 33 KO’s) and WBA Middleweight World Champion and Mandatory Challenger DANIEL “THE MIRACLE MAN” JACOBS, (32-1, 29 KO’s). The event will be produced and distributed live by HBO Pay-Per-View beginning at 9:00 p.m. ET/6:00 p.m. PT
Presented by K2 Promotions in association with Teiken Promotions, tickets priced at $1000, $600, $400, $300, $200 and $100, are now on sale and can be purchased at the Madison Square Garden Box Office, all Ticketmaster outlets, Ticketmaster charge by phone (866-858-0008) and online atwww.ticketmaster.com or www.thegarden.com
Tags:ChocolatitoDaniel JacobsHBO PPVMadison Square GardenMarch 18thmiddleweightpay-per-viewRoman GonzalezSrisaket Sor Rungvisaisuper flyweightTeiken PromotionsThe Miracle Man