Lukie Ketelle
0 0 0
Heavyweight Chazz “The Gentleman” Witherspoon is looking for a big fight in the suddenly hot heavyweight division.  In order to get into the mix, he will need a victory this Saturday night when he takes on veteran Mike Sheppard in the eight-round main event on at The Claridge Hotel in Atlantic City.
The Witherspoon – Sheppard bout will headline a nine-bout card, promoted by Mis Downing Promotions and Silver Spoon Promotions.
Witherspoon, 36-3 with 28 knockouts, is on a six-fight knockout streak and has not lost in almost six years.
Witherspoon will be making his first start since stopping Carlos Sandoval in the 4th round on October 1, 2016.
“Everything is good, and despite me having a layoff, I am never too far out of shape, so I don’t expect to have any ring rust,” said the 36-year-old native of Paulsboro, New Jersey.
In Sheppard, Witherspoon is taking on a veteran, who has fought a handful of top heavyweights.
“He is a veteran, and he has 25 wins, so you have to respect that.  I am not taking him lightly.”
Witherspoon is done taking layoffs, and he does not expect any more layoffs.
“I want to stay as busy as possible, so I can be ready for big fights.  I am closing in on 40 wins, so with the heavyweight division getting hot again, I feel with my record, that I should be able to get into the mix.  I always like fighting in Atlantic City.  It is a 40-minute drive from my home.  It has been a pleasure working with Mis Dowing Promotions, and I look forward to a great night on Saturday.”
In the eight-round co-feature, Anthony Young (18-2, 6 KOs) of Atlantic City takes on Fidel Monterrosa Munoz (38-16-1, 30 KOs) of Mexico in a welterweight fight.

Alejandro Jimenez of New Jersey will make his pro debut against Derrick Pitts (0-1) in a bantamweight bout. 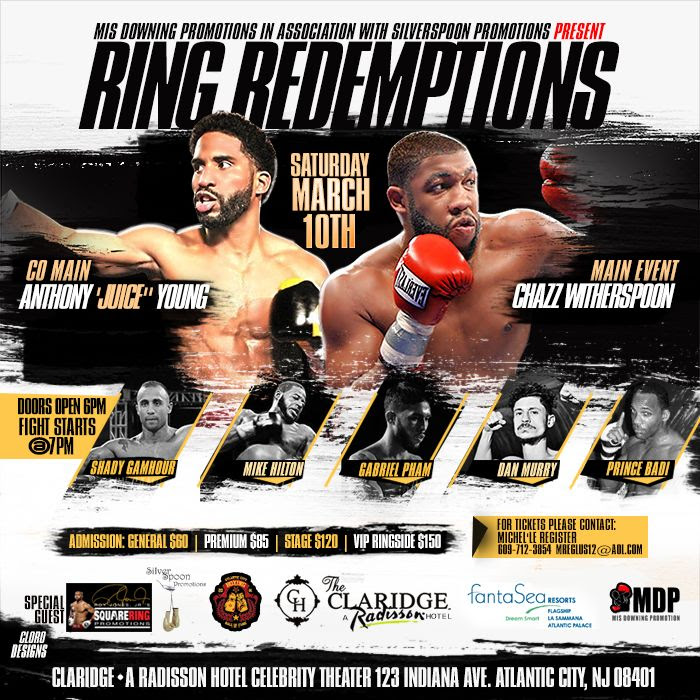 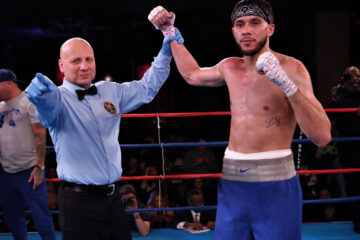