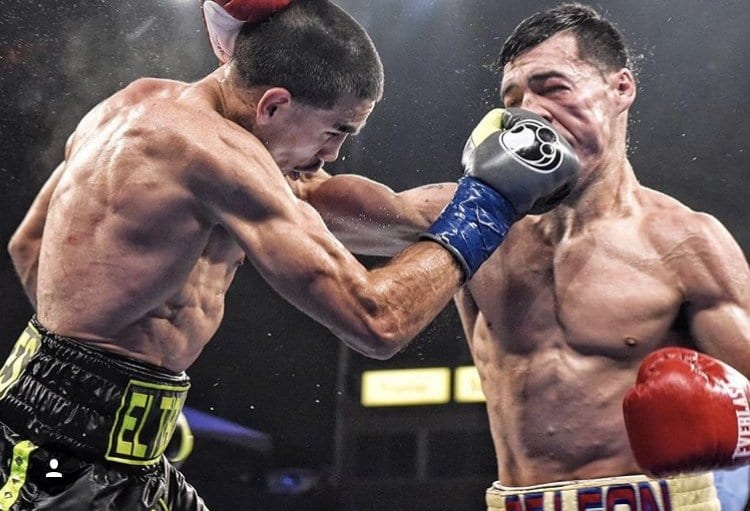 Coming into the fight I knew I had a bias and when someone in the media room called Andy Vences, “the b-word” I nearly snapped as well, albeit it was a teenage fighter who was supposed to be there, but still. That being said I try to be as fair as possible, but once the first bell rang, I knew it’d be tough.

Andy Vences versus Erick De Leon will forever be remembered in boxing for just as much inside the ring as outside and no we are not talking about the childish name calling or promotion of the fight prior to fight night.

The fighters symbolic fought in a rain-drenched StubHub Center in Carson, CA almost as if their loved ones who are no longer with us, sent tears down from above to partake in the action. Getting a glance look the fighters they so heavily believed in, but couldn’t be there in the physical form to watch.

For those that don’t know the backstory of either fighter, here they are.

Vences, a lesser known amateur, who was never seen as a prospect, was guided by beloved manager Herb Stone, who abruptly died on Memorial Day last year. Vences and Stone were close and Stone always kept Vences’ best interests at heart when dealing with anything in the boxing business. Vences promised Stone that he would win a world title in his honor one day.

On the other hand, De Leon was hand selected by boxing royalty in Emmanuel Stewart from the early age of eleven. The last remaining direct lineage to the Kronk Boxing Gym in Detroit, De Leon is a fighter that was destined for stardom, but seeming has yet to catch on. Stewart passed in 2012 mere months before De Leon’s pro debut.

De Leon, a decorated amateur who accomplished the impressive feat of winning three Golden Gloves national titles in three weight classes in three consecutive years was primed to take the jump into a spot he felt destined to be his on ESPN, whereas Vences was someone who worked for this moment out of obscurity and was unwilling to let that happen.

The contrast between the two fighters was apparent in every regard down to their clothes. De Leon is a blue collar, a soft-spoken fighter that seemed to live by the moniker of “actions speak louder than words”. Vences cherished the moment, spoke freely and was unforgiving in his criticism of De Leon. The nature of their behaviors were evident all week when from the press conference to weigh-in to even an awkward moment to start the fight in which Vences refused to look at De Leon.

That being said the duo of Andy Vences and Erick De Leon have the same work ethic, similar if not the same respect in the gym for the type of work they give high-level fighters an both truly believed this was going to be their night and that boxing fans who don’t inhabit boxing gyms would know them by a first name basis. In essence, they were similar, but also far apart.

On this evening,  March 10th we saw a technical fight that saw Vences picked up round after round early until seemingly a cut in the sixth round cut open Vences as De Leon began to gain confidence. The fight was one of respect, testosterone, and willpower, with neither wanting to look bad or give the other any bragging rights.

It was for me the tense competitive nature of the bout along with an unusual visual of rain and two fighters who didn’t see themselves as anything other than the best in the division that made this feel like one of those ‘ol’ timey fights’ my grandfather used to talk about.

A pillar of time or a trivia fact for the boxing historian to look over when two young prospects met early on, in the rain and fought to a draw in one of the most historic venues in California.

I try my hardest to be unbiased, but at times you can’t be. You become more than just colleagues, fighters become friends. It at times makes it hard to write since you want to protect your friends, but be honest with the general public. I feel I am no different than Jaime Garza of All Access Elite Boxing, who has covered De Leon for years, not unlike how I have covered Vences.

That being said watching De Leon made appreciate how he fights and the class of fighter he is. De Leon fights like the myth that is carried around the gym before him that probably has mortal foes fearing his name, it just felt to me like Vences did just a tad bit more.

The poetic nature of the visual of Herb Stone and Emmanuel Stewart making their presence known over the ring in the form of rain made a beautiful illustration for a very high-level fight. The StubHub Center, which has been known for wars, on this evening or should I say in this bout, saw a chess match with a couple of people looking down who cared about the two in the ring, just making sure that both of them were alright as well.

Vences versus De Leon was the night boxing wept.