Juan Francisco Estrada picked up a stay-busy win over Felipe Orucuta in a dominant 12-round decision win from The Forum in Inglewood, Ca, broadcast worldwide on HBO Boxing. The bout was one-sided as Estrada, outside of a few sloppy and inane rounds, separated himself from his foe, who didn’t seem quite ready for this stage.

After the bout, Estrada called out the man that beat him on Superfly 2, Srisaket Sor Rungvisai.

The co-main event saw Donnie Nietes, a man who hasn’t lost in fourteen years fight to a draw with Aston Palicte. The bout wasn’t the most entertaining fan friendly bout as a lot was on the line as in a vacant WBO super flyweight title as well as pride with both Filipino fighters wanting to win for the honor of their country. The overwhelming consensus was that Palicte won the early rounds, but Nietes edged the bout in the second half, but the judges disagreed.

“Of course I won the fight. I dealt with his reach, I hurt him, and I controlled the fight. I wanted to unify. Now I can’t even leave the ring with my belt.” said Donnie Nietes after the bout in his first fight in his new weight class of super flyweight.

“It was a close fight, but I thought I won it in the first half of the fight. I threw more punches and landed more punches. He came on in the last few rounds. Let’s do it again, anytime.” said Aston Palicte.

Super flyweight Kazuto Ioka made a heck of a U.S. debut by picking up a dominant ten-round decision over McWilliams Arroyo in a fight Ioka dropped Arroyo in the third round and cut him in the tenth. Ioka, a legend in Japan, is mostly known for his defensive wizardry, but showed an impressive counterpunch acumen in this bout as well.

After the bout, Ioka was pleased with HBO Boxing debut saying the following.

“I’m very happy with performance and very happy to have fought in America. The atmosphere
was fantastic. I can’t wait to come back and fight on the next Superfly card and against the best
in the division.”
The attendance for the card was a little over 4,000 people with no word on gate.
Tags:Aston PalicteDonnie NietesFelipe OrucutaHBO BoxingJuan Francisco EstradaKazuto IokaMcWilliams ArroyoResultsSeptember 8thSuperfly 3The Forum
Previous post 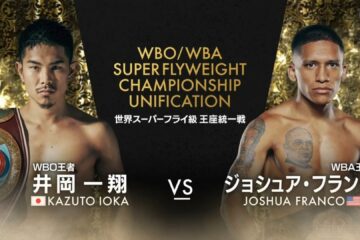 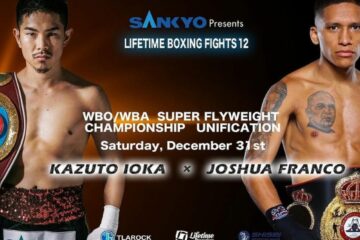