Here the live undercard results for the Wilder vs. Fury heavyweight title fight at Staples Center in Los Angeles, California, the main card begins at 6 PM PST, on Showtime pay-per-view.

Heavyweight Chris Arreola as well as a title fight for the vacant IBF minimumweight tile fight between two unbeaten fighters Mark Anthony Barriga and Carlos Licona, will fight after the pay-per-view.

Robert “The Ghost” Guerrero (34-6-1, 19KO) made a successful ring return with a second-round knockout over Adam Mate (28-13 9KO). Guerrero dropped Mate for at the end of the first round and finished him in the second round. Guerrero eyes a big fight in 2019.

Cruiserweight Marsellos Wilder (3-0, 2 KOs), the younger brother of heavyweight champion Deontay, picked up a four-round decision over David Damore (1-5-3, 0 KOs). All three judges scored the bout 40-35 for Wilder, this was the first time he went the distance in a professional fight.

Former super welterweight world title challenger Julian “J-Rock” Williams (26-1, 16 KOs) made short work of  Francisco Javier Castro (28-9, 23 KOs) as it took, but only two rounds for Williams to get a technical knockout. The referee stepped in at 2:40 of the aforementioned second round as Castro was taking a beating

In a battle of the lower weight classes, 18-year old light flyweight Jessie Rodriguez (8-0, 4 KOs) continues to look promising as he soundly outpointed Josue Morales (8-9-3, 0 KOs) picking up a six-round decision with the scores of 60-54 on all three scorecards.

Rodriguez, known as “Bam” is the brother of Joshua Franco and trains out the Robert Garcia Boxing Academy.

The bout saw featherweight Issac Lowe (16-0-3, 6 KOs) of Lancashire, England knockout Lucas Rafael Baez (33-17-5, 17 KOs) with a devasting left hook to the body at 2:11 of round five in a scheduled ten-round bout for the vacant WBC International featherweight title. 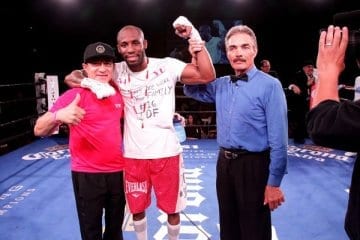