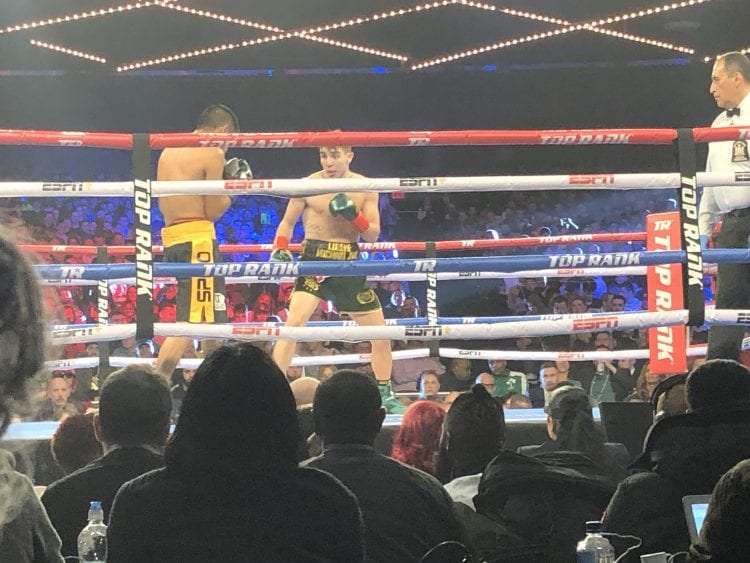 In front of 3,712, Irish featherweight Michael “Mick” Conlan fought at the Hulu Theater at Madison Square Garden on St. Patrick’s Day for the third year in a row.

“I think I just used my skills as I said I would. I think I showed a lot of good defensive movements and things I’ve been working on. We were in no rush to try and take out this guy. He’s tough. He went the distance with {Nonito} Donaire and a few other top fighters. He had a tough head on them. There were a few times I probably could’ve stepped on it, but we wanted to practice things we’ve been working on. I felt I did that tonight.” said Conlan

The Belfast native, who was flanked to the ring by WWE superstar Finn Balor, alternated between southpaw and orthodox and kept Hernandez (24-4-2, 10 KOs) guessing throughout the evening.

The two-time Olympian never was in danger, and once again, emerged victorious on his nation’s holiday

“These are developmental rounds that will help him become a world champion. I am very pleased with what I saw in there. He is working on exactly what we are practicing in the gym, and it’s working.” said Adam Booth, Conlan’s trainer.

Brooklyn native and former welterweight world champion Luis Collazo kept his name alive with a split decision over Samuel Vargas (30-5-2, 14 KOs) in a 10-round welterweight brawl as he hopes to get with Terence “Bud” Crawford in the near future. The judges scored the bout as followed: 96-94 Collazo, 96-94 Vargas, and 98-92 Collazo. The 37-year-old Collazo (39-7, 20 KOs) battled Vargas in what was a phone booth battle, with little separating the two combatants as Vargas pressed forward all night.

“As a fighter, we always want to fight for a world title. I want to be a world champion again,” Collazo said. “I still got the desire. I still got the fire. And I would like to fight the top guys in the welterweight division. They know who they are. I called them out before. It just hasn’t happened.” said Collazo after the fight.

Mojica knocked Barnes to the canvas with a body shot in the second round, but the referee did not rule it a knockdown. Barnes, who suffered a broken nose in the opening round, never could get on track.

“It was really important for me {to hurt him with that body shot}, even though they didn’t count it as a knockdown. It gave me confidence,” Mojica said. “I knew I could hurt him throughout the other rounds. I got a little away from my game plan, but I stayed sharp for the most part. I deserved to win. If I win here in New York, Madison Square Garden, St. Patrick’s Day, and I came out with the win, it was because I deserved it.” said Mojica.

Josue “The Prodigy” Vargas (13-1, 8 KOs) extended his winning streak to seven with an eight-round unanimous decision over the durable Adriano Ramirez (10-3, 6 KOs) in an eight-round super lightweight fight. Vargas, who hails from the Bronx, won via shutout on all three judges’ cards.

“I put on a great eight-round performance, the first time I went eight rounds as a pro,” Vargas said. “I was happy to see my family and friends support me. I’ll be back soon to put on another show.” said Vargas

“I don’t know how one judge scored the fight a draw, but I am happy with my performance,” Nikitin said. “I look at every single fight like a championship fight and fighting at Madison Square Garden was a great thrill. The Conlan fight will happen eventually. That is what we both want.” said Nikitin.

Joseph “Blessed” Hands Adorno (12-0, 10 KOs) passed the stiffest test of his career, notching a unanimous decision against Victor Rosas (10-9, 4 KOs) in a six-round lightweight contest. All three judges scored the fight 58-54 for Adorno, who scored a knockdown in the fifth round.

“I felt a little bit weird inside the ring tonight. I don’t want to give any excuses, but I think the weight cut affected me,” Adorno said. “I’m thinking of maybe moving up in weight to the lightweight division. For some reason, I couldn’t let my hands go. I couldn’t get my rhythm going. I also didn’t listen to the instructions of my corner very much, but we got the job done. This was a learning experience. We got the win. On to the next one.” said Adorno.

Top 140-pound prospect John “El Terrible” Bauza (12-0, 5 KOs) cruised to a shutout six-round unanimous decision over Ricardo Maldonado (8-9-1, 1 KO) by identical scores of 60-54. It was the Top Rank debut for Bauza, who was born in Puerto Rico.

Errol Spence Jr is THAT GOOD -- has PPV moment