O’Shaquie Foster Looks to Fulfill Opportunity Of A Lifetime, Tonight on NBCSN 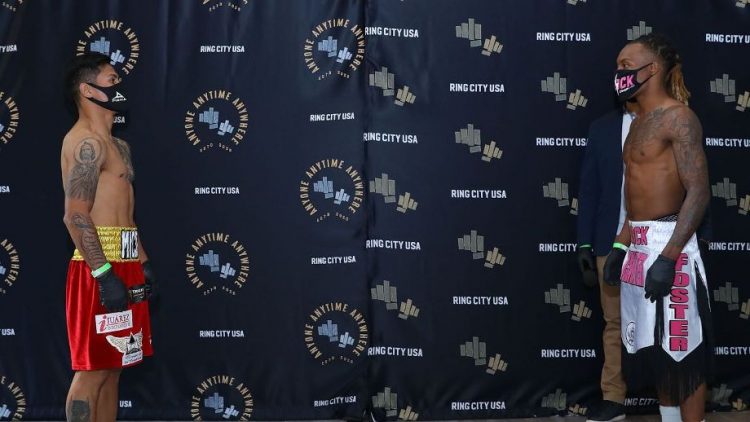 O’Shaquie Foster (17-2, 10 KOs), has a rather unassuming record with two losses that glare out any knowledgeable fight fan, as the Texas native who is trained by Bobby Benton, the same coach of famed 140 lbs fighter, Regis Prograis, as Foster preps for a ten-round main event fight against Miguel Roman, on NBCSN, tonight, November 17th.

“They both came from the same thing – not being focused, I was still in the streets,” said Foster about his two early-career losses. “Since the amateurs, I always went off my talent, and as I got older I stopped having to work as much, and would go to local tournaments and win them without training as much. I tried to take that into the pros and it just didn’t work.”

Foster, who not unlike a lot of boxers was a prodigy. yet as our good friend Jeremey Herriges of Fansided.com pointed out, Foster’s life in Orange, Texas was anything, but smooth.

Foster’s mother died when he was 12-years-old, and in context, it appeared, Foster used boxing as a way to stay focused using the discipline of the sport of boxing, to guide him and ground him during difficult and traumatic times.

The cousin he was closest to, died four days before his loss to Rolando Chinea, on a ShoBox card, that cousin, Jimmy Franks was shot in the head in Houston, Texas.

Foster was now finding himself on a rocky road, and I am not talking ice cream, as the struggles that surrounded his life intensified, the thing he always had, become his main focus – boxing.

“Just going through that hard time, and watching Terence Crawford fight on TV, it just lit a fire under me that I just didn’t want to go back to that life,” said Foster about the moment, he realized he had to give boxing everything he had.

Foster with two losses became what people in the industry call “the b-side”, “the opponent” or for those reading this for leisure, the guy who is supposed to lose despite trying their best because the prospect they’d fight was supposed more talented than them. Essentially, a stepping stone for a future star of the sport.

Foster upset Frank De Alba, a tough Philadelphia fighter, on the road, with that win on the club scene of boxing, Foster got another chance on ShoBox, this time against a Sergio Martinez co-promoted fighter Jon Fernandez.

At the time, Fernandez was looking to be a dark horse of the division, being tall, rangy, and having a good amount of power. Some saw parallels to Kelly Pavlik in Fernandez, even.

“I have the utmost confidence,” Foster said with a smile over a Zoom call. “I see it like this, wherever I am at, the ring don’t change.[SIC]”

Foster ran through him in a bout that wasn’t even competitive, but unlike most sports, a good performance against an emerging prospect didn’t open the doors for Foster like one might have hoped. Foster didn’t enter into the next round of the playoffs, like in teams sports, rather he now was being avoided by astute boxing minds guiding their professional boxing careers.

Foster who is signed to DiBella Entertainment, ran by Lou DiBella, stayed active in the ring secure fights along with his manager Keith Mills, as he positioned himself in the WBC rankings, awaiting big fights. One of his most notable was a “KO of the Year”-type performance against Jesus Bravo, listed below.

Foster will be in with his most notable opponent since Jon Fernandez on Thursday, tonight, in Miguel Roman. Roman is currently ranked #6 by the WBC at 130 lbs., whereas Foster has somehow fallen to #8 despite, well not losing, or doing anything wrong. A win, in theory, would put Foster in the top-5 of the rankings of the WBC, which most including myself consider the most prestigious sanctioning body in all the sport, especially with their commitment to bettering the sport outside of the ring, investing in medical research, and non-profits.

Foster’s opponent, Roman, a 75-fight veteran in the professional realm, who is trained by Rudy Hernandez, and though he never won the WBC world title, Roman has won seven different versions of the WBC title from 2007-2018. Anyone looking past Roman would be foolish, as his trainer is as old-school and quality as they come, not to mention the brother of two-time world champion Genaro Hernandez, and Roman, has made a career out of breaking people’s wills.

“He is durable, real tough, a warrior who comes to fight,” said Foster of Roman. “[Roman] is definitely coming to fight.”

Foster will look to improve upon his record, and get Ring City USA, started in the right light, tonight, as the debut school-night boxing card on NBCSN will start at 6 PM PST.

O’Shaquie Foster Looks to Fulfill Opportunity Of A Lifetime, Tonight on NBCSN