Every fight had cussing, blatant and direct.

Each fight seemed to be in a blood feud, only resolved by a bare-knuckle fistfight.

Each bouts introductions, saw animated fighters often saying or acting as though a street fight was going to occur and not a sport.

Each fighter had a persona, larger than life, drama, antics, and theatrics. It isn’t quite the mayhem of the original UFC, but it isn’t that far off.

Bare Knuckle FC was everything you could ask for when little major boxing was offered this weekend ahead of the Super Bowl weekend.

The purist might not love it, but Bare Knuckle FC is what it is, and is going to every extent to cater to those who derive enjoyment from their content.

As the world moves more towards, YouTube stars, and big draws controlling the sport (maybe it always has and I wasn’t aware prior), Bare Knuckle FC taps into the “old fashion tough guy (or women as in the main event), bar fighter”. If an old western was a fight card, it would be Bare Knuckle FC, and expecting anything more is unfair.

It is sheer violence, with most being drawn to the renegade nature of the organization as each fighter felt part-fighter, part-vigilante. With one exception, the main event Paige Van Zant, who was probably more so drawn by the purse offered for her massive following and social media presence.

The promotion is building their cards around fighters who never quite achieved success in other forms of combat, mostly MMA, and boxing, who are looking for a rebirth, in the upstart company, as a label of journeyman or women, might be applied if they continued in their original sport.

Case-and-point the main event, as we saw the beautiful Paige Van Zant, a former UFC fighter, who has now turned into a social media influence along with taking on the challenge of being a bare-knuckle brawler.

Van Zant has 2.7 million followers on IG, alone. More than some major network, and companies.

Van Zant in her promotional debut took on the BKFC champion Britain Hart, who holds the 125 lbs world title in this organization.

Hart is a proven veteran in bare-knuckle fights winning three straight events, and even doubted Van Zant’s commitment to bare-knuckle. To be honest, a lot of the hoopla for the event, I had to ignore in regards to the main event, especially an awkward and tense weigh-in involving pushing and shoving.

When you looked at the two of them, it was an easy sell – Van Zant looked like a cheerleader, Hart looked like a girl who would bully the boys at school. The optics, and sheer contrast with the level of violence made this a must-see event.

For me, I wanted to see if Paige Van Zant could it, could she win the belt in an organization like BKFC, as Van Zant was thought of more so as a wrestler in her most successful UFC fights.

Not unlike when I talked to Shane Mosley Jr., earlier this week, I felt Van Zant took on bare-knuckle not just for the check, but to earn the respect of some of the fighters who doubt her, based upon her lifestyle choices. Van Zant is a very attractive woman, who is now married might I add, and in the UFC her looks propelled her to the top, and sadly for her, Van Zant couldn’t quite win the fight she needed to, to get into position to win a world title.

From the outside looking in, this felt like her moment, to show people that she is a fighter, as most of her social media content is based around her looks, and less so about her fighting career – prior to this bout.

Van Zant won the first round, as many might have been cheering for the charismatic star to bring more notoriety to the organization, but sadly for them Hart was too talented, and more so too tough.

Sometimes you met people who don’t want to lose, and Hart didn’t want to lose to Van Zant. Hart won the middle rounds, and despite a late flurry by Van Zant, held her off for the title.

The bout contested around the 135 lbs limit before coming in below that weight, saw non-stop action.

The bout which I assume will be a modern classic in the upstart organization, saw the tenacity and toughness of Bedford run into a seasoned veteran professional boxer, who appeared too fast and too well-schooled using nuanced techniques like targeting the body, which appeared to be the slight edge needed to get the win.

Nguyen, an aging veteran who if he continued as a pro boxer possibly could’ve possibly won a world title, but more than likely would’ve been thrown through the wringer, forced to face the brightest-and-toughest fighters nation had seen in some time. Fast-forward to now, Nguyen is a triumphant hero – in this upstart organization.

Despite the somewhat unapologetic in your face street fight innuendo, I saw what Bare Knuckle FC’s place is. It is a place where the guys in MMA and boxing, who often get exploited for one reason or another, can come together, become king of a new organization. Sure they might be mostly cast-offs, but they’re lovable, and the product at its roots has the charm that reminds you of going behind the cafeteria during the fifth period to see two kids fight each.

The last fight I will mention laments this with the legend, Chris Leben.

Chris Leben, one of the faces of the second-wave of the UFC fighter, spurred on by the Spike TV hit reality show “The Ultimate Fighter”, who was a part of the legendary Team Quest, known for his battles in-and-out of the ring, with action fights, and addictions he had to overcome, makes Bare Knuckle FC. Leben reminds me of the old-UFC, the lawlessness, the non-holds-barred days, the speakeasy-like environment of tough guys testing themselves amongst other tough guys.

Leben was one of the guys that made me love MMA, and probably why don’t watch it anymore, as it seemed like Leben found his calling in the sport and wasn’t trained technically in all aspects, but he was tough and willing to adapt. Leben found his life through MMA, and we don’t see as dramatic of characters like the Chris Leben’s of the world as often anymore.

Not unlike an old territory wrestler, like Terry Funk wrestling in ECW for the last time, Leben took his final nod to the camera with very menace in his face that he had in every show for every major UFC fight in his prime, as the ring announcer called his name in Florida one last fateful time.

His opponent, Quentin Henry was a larger than life presence, who looked like he would’ve been a tag-team partner with Hulk Hogan in a storyline leading up to Wrestlemania to fight Sgt. Slaughter in days past.

The fight summed up the card, as a whole – Henry ran at Leben. Leben dropped him with a short uppercut to the eye that caused utter confusion, as it seemed to be an eye poke.

Henry dropped to the mat and stated loudly “Oh NO!” and maybe a cuss word for a good measure – a common occurrence on this given night. He stayed on the mat for a while, it seemed like an eye poke caused the damage, but the replay showed it was a punch. The ruling was simply – Henry was asked if he wanted to continue. If he didn’t want to continue the fight was over, but taking the time to assess the foul did not rule Henry out of the bout, even though it was landed from a legal punch.

The fight continued and the skillset of Leben proved the difference as Leben had the shorter and crisper punches, as Henry had power and aggression, but just lacked the experience of Leben, and was on the mat being counted out shortly thereafter.

“What a [expletive] way to finish a career,” said Leben after the fight, was the most on-brand BKFC thing of the night.

The fight merited more interest than any show prior, but the big question is, “will people come back?”

Britain Hart and Dat Nguyen picked up the biggest wins of their careers. Nguyen has a rematch that is easy to make with Bedford, which can create a homegrown rivalry, and Hart hopefully should see a boast in acclaim after beating someone with the name of Van Zant.

That is the big question for me – what happens after this? They have the fight dates, they have the shows, but do the fans create the relationships with the fighters, that is to be determined.

One thing is for sure, Bare Knuckle FC provides an early 90’s nostalgia that many of us miss – and gives fighters who might not get chance to be successful elsewhere a platform to compete for a good money and a belt.

The Return of Otha Jones III, Jones Ready To Return After Draw 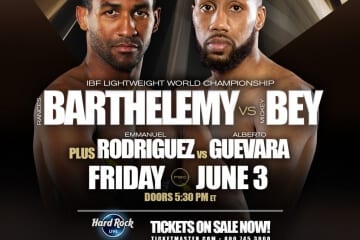