Per usual, this is my cheat sheet for who I am currently following, this is by no means a ranking or whatever you call it, it is simply fighters I am drawn to, and achieving great things in the amateurs, and my observation upon them.

Below are the seven fighters I am following in USA Boxing, who are not an Olympian or an Olympic alternate.

Steven Navarro is one of my favorite fighters currently in the country, Navarro is fast, smart and a great boxer. On top of all that, Navarro doesn’t cheat the game, Navarro has a body that only comes from hard work, and I don’t see anyone in his age range with a similar level of conditioning. Navarro will be a major force heading into the 2024 Olympic Trials.

Harvey can box and Harvey can bang, and along with a rising star in the boxing coach world, Darrell Davis in his corner, this duo will be hard to beat, as their dedication is unmatched so far. Enter the bracket, Harvey’s coach was so focused he didn’t know any of the fighters they fought names, but prepped Harvey for any situation, as Harvey is simply put a winner. Harvey can adjust in close fights, and seize moments of opportunity to get wins. Harvey seems like a special fighter – and is sparring top pros already

Cameron Patton is the odds on favorite early on for Paris 2024, and Patton is seeming to be special. Patton checks a lot of the boxes that made Richard Torrez Jr., the current U.S. Olympic fighter, special – a good boxer, good power, and strong work ethic. Patton is winning fights via stoppage, and looking dominant as we wait to see his development.

Hand speed and foot speed is the name of the game for Abdullah Mason who is fast and smart in the ring. Mason’s win over Joel Iriarte was not just impressive, it was a statement. Mason is looking like a fighter who is pro-ready, but also going to be difficult to beat as an amateur as he has the volume to compliment his advantages which will make him a stylistic nightmare for most.

Omari Jones is one of the best distance fighters in the country. Jones can land his right hand at will if the jab is connecting and his right uppercut is deceptive, and quick. Jones is a thinker, who uses awkward movements to offset his opponent while working on his own timing. Jones is a fighter to keep an eye on as he has made massive growth over the past year.

Winn not unlike Jones, came from the bottom of the bracket to be a national champion. Winn of Houston, Texas, is in camp with all the top dogs in the sport, and took the tournament from more experienced fighters to stand out. Winn is a fighter who has the potential to be a star since he is a great interview, and a great fighter, so I would pay attention to him, tenfold.

The elder statesmen of the 138 lbs division, Harley Mederos, is strong, tough and a solid fighter. Mederos, who is one of the biggest punchers currently in USA Boxing, came into the tournament with the mindset to win the tournament and did just that. Mederos should turn pro soon, albeit he might go for the Paris 2024 games, Mederos is pro-ready, and an entertaining fighter to watch with very good power.

Notable Names To Watch For: Angel Perez (one of the biggest punchers in the tournament), Nathan and Elijah Lugo (big punchers who put a lot of pressure on opponents and are extremely fun to watch, Damon “Pistol” Flores (one of the most talented young fighters who seems to have all the basic key concepts down at a young age), Fernely Feliz (a solid heavyweight with good ability), Jordan Panthen (talented multi-facted fighter), Ralph Clemente (big puncher who starts strong), Obed Bartee-El (pro-ready fighter), Lorenzo Powell (a fighter who has a very high ceiling as to where his abilities can take him), Joel Iriarte (one of the best pressure fighters in the country, Jose Ramirez 2.0),  Steve Johnson (a pro-ready fighter who sometimes wait to counter too much in amateurs and get docked for that), Dominick Reed (big punching southpaw who will progress into a world champion), Diego Bengochea (fan-friendly action fighter), Ram Gardana (solid pressure fighter), Kevin Montano (a will fighter, not just does he bring pressure, but also makes you find your reason for wanting to box when facing him), Jonathan Mansour (a solid boxer with a good skillset), Terry Washington (quite possibly the fast boxer in the tournament, if not one of the fastest), James Bragg Jr (exciting pressure fighter out of Soul City Boxing Gym) : 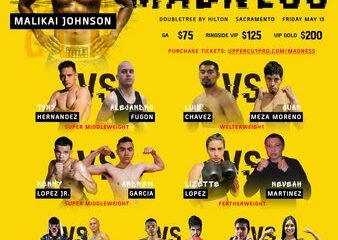