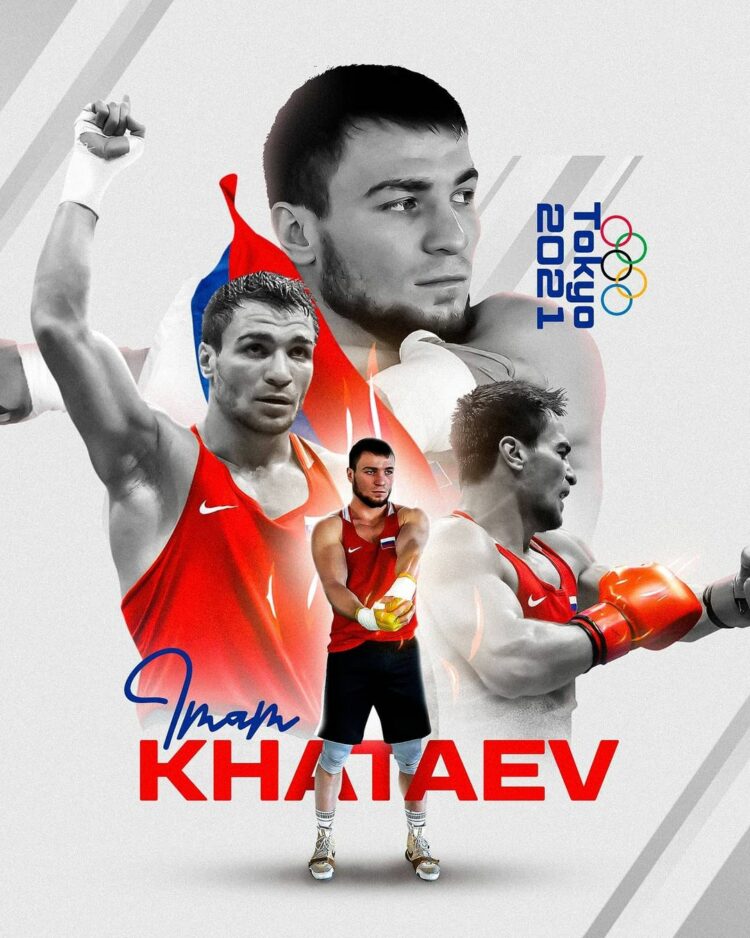 For every Olympic Gold Medalist, I am going to take time and give a brief bio and context for fight fans who didn’t watch the Olympic boxing contest, but with Imam Khataev losing a heavily debated decision to Benjamin Whittaker, Khataev deserves the same treatment.

Khataev, who fights like the current world champion Artur Beterbiev meets Sergey Kovalev, but with more of a defensive focus, gave us two knockouts in the Olympics that I will forever remember. One of which went viral.

Khataev was essentially a movie character that we all seemingly wanted to get behind. Khataev would hit mitts in the back at full force, walk to the ring with no emotion, and show even less emotion when he stopped his opponent, and then walk back proudly to the locker room. No dance, no celebration – calm, cool, and collected.

Khataev was a big puncher, who never needed to express himself verbally to convey his message.

In the first round, Khataev gave Mohamed Assaghir five standing-eight counts en-route to stopping him in the third round. It wasn’t just the power it was composure that was fun to watch as standing-eight counts occurred in the tournament, but the methodical and surgical nature of Khataev felt like a great white shark stalking his prey.

The second round saw him outslug Bekzad Nurdauletov, a tournament favorite. Khataev took a good punch and gave an even better one. In amateur boxing we often see speed rewarded, and the pro-style power punchers lose, Khataev had an aura, not unlike Mike Tyson, one of Khataev’s idols, which when he got in the ring you saw his opponent felt his presence.

Khataev has that thing promoters always say they want, but sometimes ruin when they get – a fighter who people are just naturally drawn to. Khataev looks like a fighter, and beyond that delivers brutal knockouts, all while showing no emotion seemingly.

The 26-year-old light heavyweight, who with his Olympic medal just got a Wikipedia page made about him. His Olympic bio seems just as oddly fascinating as his fights themselves as he listed wrestling as one of his hobbies, while also having attended Chechen State Pedagogical University, in Grozny, Russia, where he is listened as living currently.

Khataev, who lost to Benjamin Whittaker in a bout that came down to what you favor as a fight fan, and one that I would have rewarded Khataev for his cleaner punches in the first-and-third-rounds of the bout. The bout felt like deja vu of what happened to his fellow countryman, Artur Beterbiev, the current WBC and IBF unified light heavyweight world champion, who lost to Zhang Xiaoping, the eventual gold medal winner at 2008 Olympics in Beijing, China.

The positive from someone who enjoyed Khataev’s fights in the Olympics as not unlike Tom Brady being drafted late in the NFL draft, Khataev could enter the professional boxing world with a chip on his shoulder. The last guy to enter from the amateurs with anger and use it well was Teofimo Lopez, who is doing pretty well for himself now.

Khataev is a unique fighter in which I am excited at the potential of what he can become – more so than anyone else in this tournament. He feels like someone that boxing could really take to, especially in this era, as any of his fights could turn pro.

Even more so, Khataev’s goal is to become an undisputed world champion – which is music to my ears, as he isn’t content with just being a champion, he wants to win all the belts.

Khataev is the guy coming out of this Olympic class, and I see some parallels to Khabib Nurmagomedov – as well as fear the laziness of Americans when saying none western names or a promoter trying to promote him in an unhelpful way not utilizing his amazing talents as a fighter. If fighting was truly about in-ring action, Imam Khataev would be a slam dunk, sadly the pro game is just as much about building a business around a fighter, and I hope a top promoter does right by him.

Khataev has been the most enjoyable Olympian to watch in the 2020 Olympic Games, of any sport.

Boxrec lists his amateur career as 69 wins with 18 losses and only 10 wins via KO. He also was undefeated from 2019 until 2021, as it appears he is improving against movers, something that in power fights his power could fix with the long duration as well.