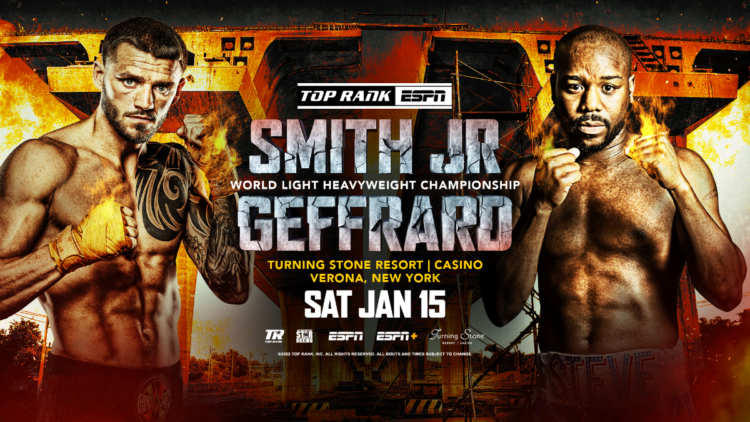 Geffrard is a nine-year pro, who started his career with two losses and has gone undefeated in his last 18 bouts. His most notable win is over Denis Grachev, but another notable win is Dmitry Sukhotskiy, whom he beat in China. Geffrard, a native of Delray Beach, Florida is a road warrior, who has struggled with activity as this is his fourth bout in six years.

Various reports have noted that multiple fighters turned down the last-minute world title shot as well.

“I give Steve credit for taking this fight on short notice,” Smith said. “He is a tough guy, and I expect him to bring everything he has for this opportunity. I’m ready to fight regardless of who is in the ring with me. My goal is the same, which is to defend my world title and keep it on Long Island where it belongs.”

“This is the opportunity of a lifetime. It’s crazy how boxing works,” said Geffrard about his first chance at a world title. “One moment I’m thinking about boxing on a local show, then the phone rings for a chance to fight for the WBO world title on ESPN. Unreal!”

Geddrard was prepping for a club show as mentioned, but jumped on the chance to fight on a major network. Geddrard has nothing to lose, and is playing with house money.

That being said, the bout felt like a true 50-50 battle in my eyes, as both fighters are at the end of their careers and Johnson has only one loss to his record, and it is Beterbiev, one of the best in the division. In that fight, Johnson also dropped Beterbiev. The bout felt to tell us a lot about the future of Smith Jr. as a light heavyweight world champion.

Joe Smith Jr. is a likable underdog, who keeps winning. Beyond that, his power has bailed him out for some of his technical flaws. Even though this fight is taking place in New York, it will take an honest effort on his part to win this bout, and a win should get him one of the top guys.

On next Saturday, on ESPN, Smith Jr. will now face a fighter who is seemingly himself, the last-minute underdog, who is being overlooked – and it is only fitting that is how he’d make his first world title defense.