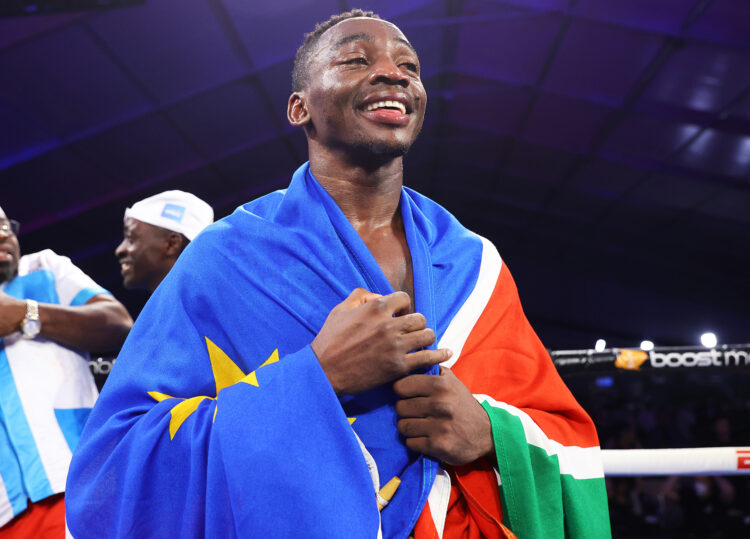 Who would’ve thought former world champion Miguel Berchelt would be riding a two-fight losing streak, but that in fact is now called reality – as the fighter, who was once viewed as one of the best 130 lbers of his era, now looks to have very little left as the come-forward pressure fighter lost every round to Jeremia Nakathila in Berchelt’s world level debut at lightweight, as a headliner on ESPN.

Jeremia Nakathila, who fought Shakur Stevenson at 130 lbs for a world title recently, is awkward guy, with a big punch, and it was alarming that Berchelt’s defense was to catch it with his face, but his trademark firepower that we are used to see coming back, was not there. In short, Nakathila in one evening became the new Masayoshi Nakatani, a spoiler who fought on Top Rank cards, and ended the in-ring career of Felix Verdejo before Verdejo shamed himself becoming a murder suspect.

Nakathila is now a guy in the sport with a marquee win, and his decision will be – does he fight at lightweight or super featherweight?

Featherweight spoiler Eduardo Baez got a ten-round majority decision over Jose Enrique Vivas as Baez upset the house fighter Vivas, who had struggled in his previous outing as well. Baez is a true professional who comes in-shape, and throws a lot of punches, and that was the key to this win.

Now Vivas will be able to test himself against a higher profile fighter in the future with world contender implications more than likely.

122 lber Carlos Caraballo is having a rough start to his Top Rank Inc career starting off with a loss and now a major decision win over tough spoiler  Luis Fernando Saavedra (9-7, 3 KOs). Saavedra is no slouch holding a win over at the time Thompson Boxing’s Mario Hernandez, but Caraballo was viewed as guy to hit the ground running in the pros, and with his loss to Jonas Sultan in his previous fight – I think he has a very high upside, but still needs time to develop into a true contender at this point.

2020 Olympic welterweight Tiger Johnson got the second knockout of his three-fight career stopping Sebastian Gabriel Chaves in the fourth round. I see Tiger Johnson getting better with each fight, and am just waiting for when he adjusts to the pros. Johnson is the type of fighter that when he is comfortable you can see something special from him, but he hasn’t quite adapted yet.

Coming off a bad first-round loss to “Chon” Zepeda, 140 lber Josue Vargas looked to shake of some nerves against Nicolas Pablo Demario, as the ugly fight saw Demario bite Vargas, which was strange on top of that, Vargas just looked a bit gun-shy to my untrained eye. This was good work off mainstream television for Vargas, who I would assume gets a big fight in his next bout.

130 lber two undefeated fighters, Arturo Cardenas and Juan Hernandez Martinez fought to a draw in what was probably the fight of the night as they just beat each other up.

Adrian Serrano of Salinas, Ca, fought Estevan Partida to a draw as well. The 17-year-old Serrano punched himself out seemingly in the first round, but showed a lot of positives in this fight.

The U.S. debut of Tim Tszyu, a seemingly future 154 lbs world champion, was rather muted in America, as Tszyu turned pro against 2012 Olympian Terrell Gausha on Showtime, a network his father Kostya Tszyu fought on often.

The fight wasn’t without drama as Gausha, a very big puncher, dropped Tszyu in the first round as it looked as though this was going to be a rough debut for Tszyu, yet it was heart, grit and toughness that kept Tszyu in the fight to win a narrow points decision. Tim Tszyu at this point in this career isn’t a defensive wizard, but he is tough, game, and has a ton of heart.

If he fights often, I think he could replace the void Gennady Golovkin left, as an offensive puncher, who looks to entertain, though Tszyu is lacking the power Golovkin had, he isn’t lacking the excitement.

For Gausha, this is a letdown as this was a good chance for him to skip the line, and have a chance at a world title shot, after a few disappointing losses at the top of the division most notably to Erickson Lubin and Erislandy Lara.

The TV undercard wasn’t as notable as I thought going in. Michel Rivera was pushed by Joseph Adrono, in a 137 lbs catchweight, but Rivera’s composure, and willingness to fight a tactical fight won him the bout. Rivera should be in the title mix, very soon.

Elvis Rodriguez stopped Juan Jose Velasco in seven rounds. This should set up Rodriguez for a big fight, maybe even a vacant world title at 140 lbs. The guys that I would like to see him in with next, are Darwin Price, Richardson Hitchins or Gary Antuanne Russell.

#1 contender at the 154 lbs division, Bakhram Murtazaliev, who is promoted by Main Events, and trained by Vergil Hunter got a first-round KO off-TV, and probably was on the card in case someone couldn’t fight in the main event.

Middleweight Joey Spencer soundly outpointed Ravshan Hudaynazarov in an eight-round fight. Spencer now has 15 fights, so we should see him in a good one soon.

Super bantamweight stud Michael Angeletti stopped Angel Luna in five rounds. Angeletti is building up a great resume off-TV, I could see him on a big TV card at the middle of 2023, or start of 2024 at this pace.

Josh Warrington is now a two-time featherweight world champion as he knocked out Kiko Martinez, in a rematch of their bout years ago in which Warrington won a close majority decision.

The fight though was not without ebbs and flows, as Martinez broke Warrington’s jaw in the bout prior to the stoppage meaning, any hopes of a Liam Walsh fight won’t be for some delayed period of time.

Warrington is a big-ticket seller, and in typical boxing fashion, a fantastic feel-good story of Kiko Martinez gets written as a promoter’s dream, a cash cow, gets a belt, seemingly without reason, as Warrington was coming off a loss and technical draw, in his previous outings.

I am a Warrington fan, but in other sports, the lack of humanity boxing shows to human beings for the purpose of sheer greed is unlike any other, and it could be a culprit of the limited growth the sport has seen over the past decade that Floyd Mayweather left the sport.

Maxi Hughes beat Ryan Hughes 135 lbs bout, as he retained his IBO lightweight belt. Hughes could get a big fight soon holding a belt in a division with a lot of talent. A guy I would eyeball would be Ryan Garcia, who is fighting in a couple of weeks.

Ebanie Bridges proved myself, and others wrong, as she beat Maria Cecilia Roman, for the IBF bantamweight title. Bridges, a former ring card girl, has created a lane for herself in boxing using her beauty, social media presence, and charm to now become a focal point of Matchroom Boxing. Bridges is now trending towards being a star for their company given she looks like a model, and fights like a brute. The juxtaposition of the two things will make anyone seemingly watch since it is strange and noteworthy.

Dalton Smith, 140 lber, stopped Ray Moylette, in a seemingly showcase type bout for Smith who is a boxer with a bit of punch. Smith lost a point for low blows then dropped Moylette twice in the final round. Not sure how far either go beyond this, but it was a true fist fight.

Featherweight Skye Nicolson is staying really active, and got her second win, once again points. Nicolson is a really trick, elusive and awkward boxer, who will be a world champion in early 2023, or maybe December depending on how things work.

Joshua Conley upset Curtis Stevens, who was returning after a break. Stevens, who had fought for a world title in his career, was cut in the first round, and just didn’t have it on this night. Big win for Conley.

Chrisitan Thun stopped Amron Sands in one round at heavyweight.

The undercard standouts, Najee Lopez, who continues to look like a cruiserweight star got his fourth knockout in a row to start his career, and Daniel Blancas, a light heavyweight got about as good of a KO as you can get to start your career.

Deontay Wilder’s brother, Marsellos Wilder, lost yet again, to Eric Abraham by split decision. Abraham’s record going into the bout was 6-13, and improved to 7-13 after the victory. This snaps a nine fight losing streak for Abraham.

154 lber Carlos Ocampo went to Canada to beat the favorite Mikel Zewski stopping him in the ninth round. Up until this point, it was an Ocampo showcase as Ocampo won every minute of the fight.

140 lber Lewis Ritson got a ten-round decision over Dejan Zlaticanin, but I still don’t see Ritson as a world level fighter as he headlined a Probellum show.

Boxing On Most Major Networks Headlined By Tim Tszyu's U.S. Debut On Showtime