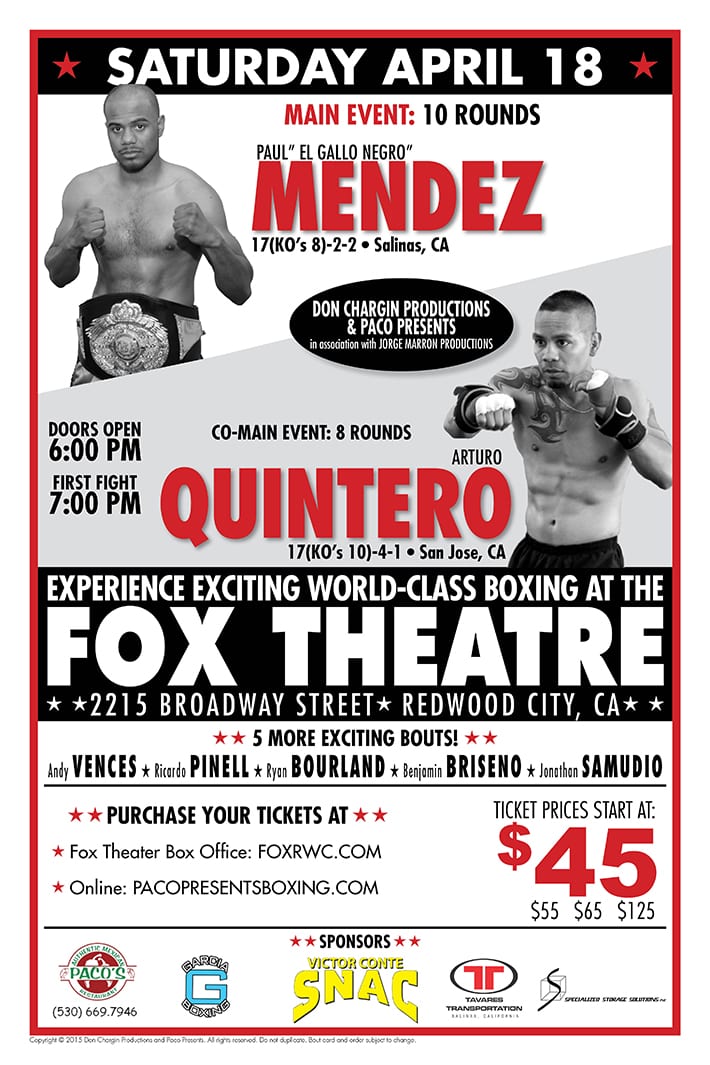 This past January 24th, in a super middleweight battle Mendez won a technical decision over Ernesto Berrospe who suffered a bicep tendon rupture at the end of the first round. Mendez is managed by the popular boxing’s grandmother Kathy Garcia and trained by Max and Sam Garcia. Mendez stated, “Berrospe claimed that in our last fight the only reason he lost was due to the injury. I will show him and all my fans that the outcome will be the same. He will lose again this time I am going to do it in a better fashion.”

Ernesto Berrospe wants a chance to prove that his injury does not change his ability to fight wars. In the dressing rooms after his last fight, Berrospe demanded to hall of famer Don Chargin “I want a rematch. I could have won this fight if I did not suffer this injury. If I have the opportunity for a rematch, I will knock Paul Mendez out!” Before his first fight with Mendez, Berrospe lost to Mexico’s superstar Daniel Sandoval 36-3 (32 KOs). So now he is looking for the chance to redeem himself and add Mendez to his resume.

In the co-main event, Jr. Welterweight Arturo Quintero of San Jose, CA will take on Carlos Valenzuela of Ciudad Obregon, Sonora, Mexico. Quintero took time off after he scored a controversial draw against former world champion Omar Figueroa Jr. in 2010. He has fought twice since this lay off, and in his second fight he stopped Mario Hermosillo in the third round. Quintero is anxiously ready to return to challenge Valenzuela and keep himself on track for another big fight.

Carlos “El Guerrero” Valenzuela is fresh off a win against Jario Llanes 9-0-1 (8 KOs) this past Friday, March 27th. Valenzuela stated that: “my record is deceiving. Quintero better be prepared because just like I did to Llanes, I am going to beat Quintero in his own backyard.”

DeCarlo Perez "The fact that Jessie is tough and experienced has me working hard but not worried."