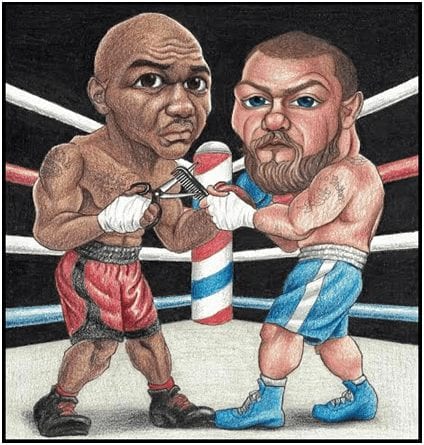 If Amir Mansour has his way, when he steps into the ring on Friday evening, May 8, at the 2300 Arena, Joey Dawejko, his opponent in the other corner, will be clean-shaven for their 10-round heavyweight showdown. The Mansour-Dawejko contest is attracting more interest than any other local pairing in Philadelphia in recent memory. The 1,300-seat building figures to be sold out long before Teddy Atlas and the ESPN 2 cameras arrive in town.

“Dawejko is going to have to cut that beard,” Mansour said.  “It defies the boxing rules. He can’t come in with that big, long beard. He’s been getting away with it probably because nobody has been saying anything. The (Pennsylvania) boxing commission knows he can’t some into the ring with that big, old beard. He’s hiding his chin, they’re supposed to tell him to shave it.”

Mansour, 42, is from Wilmington, DE, but he trains and fights out of Philadelphia. His 21-1 record includes 16 knockouts and his only loss was via 10-round decision last year to Steve Cunningham in a fight in which he had Cunningham down twice and almost out in the fifth round.

In his last match Nov. 8 at the Sands Casino Resort Bethlehem (PA), Mansour scored a one-punch, seventh-round knockout over Fred Kassi, of New Orleans, which Sports Illustrated voted the Knockout of the Year for 2014.

Dawejko, 24 of Philadelphia, has won six in a row, the last four by one-round knockout. His 14-3-2 mark includes seven knockouts. He needed only 27 seconds to demolish Enobong Umohette, of Milwaukee, WI, on March 6 at the 2300 Arena.

The May 8 winner figures to be in the mix of the best heavyweights in the world.

“At the end of the day, it doesn’t make a difference the way I approach the fight,” Mansour said, “but it’s a little thing like the beard which dudes use to cheat. I’m aiming for your chin and sometimes you can miss by just a few inches. Then if you’re in a clinch, they can rub that beard in your face and irritate the skin and stuff like that.

“There’s a reason why the boxing rules say he’s not allowed to come into the ring with his beard over a certain length.

“I want it shaved; I want him uncomfortable.  He’s isn’t going to hide behind that beard.  But at the end of the day, I don’t fear the beard; I’m going to smear the beard.”