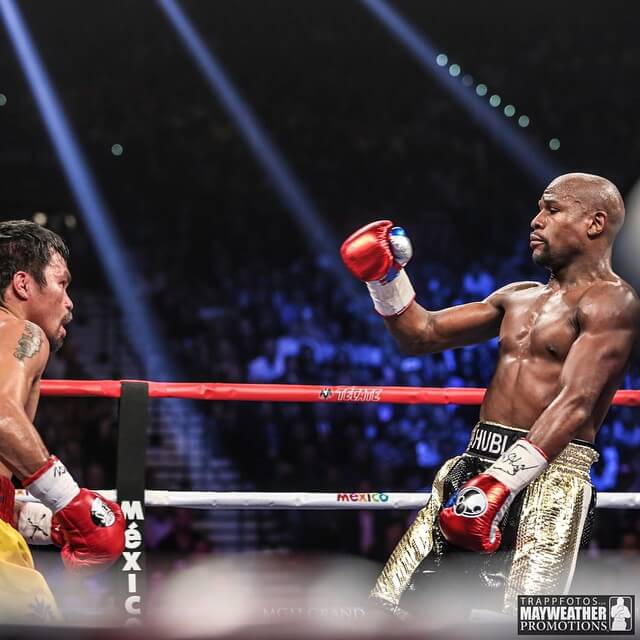 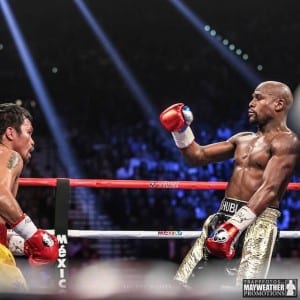 Floyd Mayweather is now the WBA, WBO and WBC welterweight champion as well as the WBA and WBC super welterweight champion, but that will not be for much longer. As Floyd Mayweather sat more somber and content more than in any previous victory before he bounced a question to Mayweather Promotions CEO and longtime friend, Leonard Ellerbe, who took the podium in the middle of the MGM Grand Garden Arena. Ellerbe explained and I paraphrase, that Mayweather will relinquish all of titles to give the young guys in the division.

This was the mark of a new Floyd Mayweather, one who didn’t seem to enjoy the build up the same way and one who didn’t want to be the brash self the fans either loved or hated. It was a man with 100 million in the bank who was stating boxing was now a job to him as he is approaching 40 years-old, it appears the belts and paying the fees to keep them mean little if anything to him.

So what does this mean? Well, guys like Brad Solomon and Jesse Hart who fought on the undercard of the pay-per-view or contender such as Keith Thurman a chance at  new titles means new prestige. The belts are more of a marketing tool then anything and at this point, Mayweather can sell a fight with or without the belt as most people who bought the pay-per-view couldn’t tell you the belts he was defending or fighting for. What this means is that some of the younger fighters in the division now seemingly have a wide open division in terms of champions as the only belt in welterweight that has ownership as of right now is Kell Brook, who holds the IBF strap. The super welterweight/ junior middleweight division is not much different as Cornelius Bundrage holds the IBF title and Demetrius Andrade holds the WBO at that respected weight class.
It might be hard to imagine, but the Oscar De La Hoya-Floyd Mayweather matchup was nearly ten years ago now and the man we once use to think of as the future has now gotten older and richer. Mayweather as of right now is claiming that his last fight will be in September on Mexican Independence weekend in Las Vegas, NV at the MGM Grand.