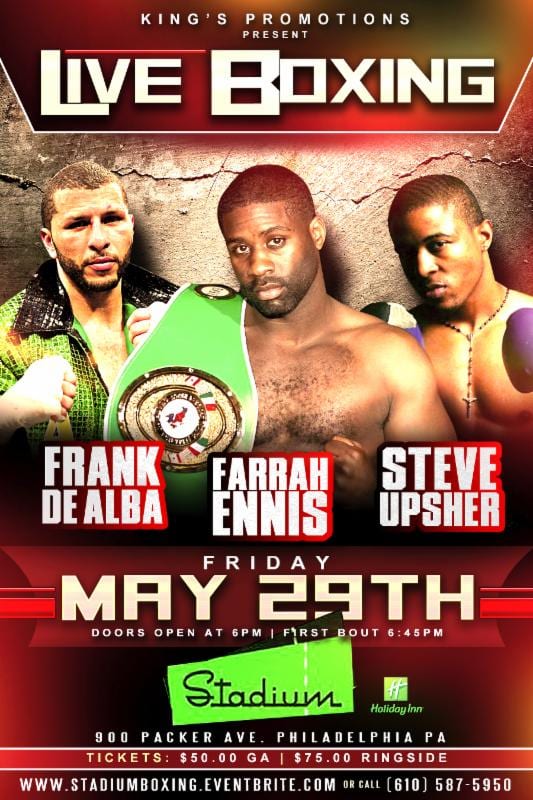 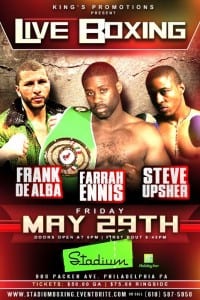 Philadelphia (May 13,2015)-–On Friday night,May 29, boxing comes to theStadium Holiday Inn (900 Packer Avenue) in Philadelphia where some of the best names in Philadelphia boxing will be featured on a card promoted by King’s Promotions.
In the main event, Frank De Alba will compete for the UBF  Lightweight title against Bernardo Gomez Uribe in a bout scheduled for 10-rounds.
De Alba of Reading, PA has won 13 straight fights to raise his impressive mark to 15-1-2 with five knockouts.

The 27 year-old De Alba has wins over Andrew Bentley (1-0) & Benjamin Burgos (1-0). He won the UBF All Americas Super Featherweight title with 5th round stoppage over Pablo Batres. He has made two defenses of the belt which includes his last outing when he won an 8-round unanimous decision over Jose Bustos onFebruary 21.

Uribe of Guadalajara, Mexico has a record of 14-3 with 10 knockouts.
The 25 year-old has won six in a row with the latest being a 7th round stoppage over Antonio Sanchez on April 19.
In one co-feature, light heavyweight Farah Ennis will be in action in a 8-round bout against Michael Gbenga
Ennis of Philadelphia has a record of 21-2 with 12 knockouts.
This will be the 32 year-old Ennis first bout in 22 months.  He has wins over Scott Sigmon (1-0), Bobby Jordan (6-0-1), Shujaa El Amin (11-2), Richard Pierson (11-2) and Anthony Hanshaw (23-2-2).  Ennis captured the NABF Super Middleweight title with a win over Victor Lares.    Ennis coming off a loss to current WBC Super Middleweight champion Badou Jack on July 19, 2013.
Gbenga of Accra, Ghana has a record of 20-19 with all 20 wins coming via knockouts.
Gbenga has fought top competition such as Dean Francis, Ilunga Makubu, Andre Dirrell, current WBC Super Middleweight champion Badou Jack, Lennox Allen, Issac Chilemba, Travis Peterkin, Joe Smith Jr., Derrick Webster, Vyacheslav Shabranskyy, Trevor McCumby, Phillip Jackson Benson and in his last bout when he dropped an 8-round decision to Medzhid Bektemirov on April 18.
In a second co-feature, jr. welterweight Steve Upsher will compete in an 8-round bout against Alejandro Rodriguez.
Upsher of Philadelphia has a record of 24-4-1 with six knockouts.
The 30 year-old, turned professional in 2003 and went 24-1-1 win his first 26 bouts.
He has wins over Michael Weaver (2-0-1), Darrell Crenshaw (1-0) and Bayan Jargal (15-3).  he is trying to break a three-fight losing streak where he took on former world champion Luis Collazo and undefeated prospect Eddie Gomez.  His is coming off a decision loss to former world champion Andre Berto that took place on September 6, 2014.
Rodriguez of Guadalajra, Mexico has a record of 24-16-1 with 14 knockouts.
Rodriguez has solid wins over John Carlo Aparicio (12-1), Ivan Perez (10-2), Daniel Evangelista (11-0-1), Hugo Hernandez (12-3-1).  In his last bout, Rodriguez won a 8-round unanimous decision over Fernando Ayala on May 2.
Also appearing in 8-round bouts will be undefeated welterweight Miguel Cruz (8-0, 7 KO’s) of Lake Mary, FL, Featherweight Brandon Bennett (18-1, 7 KO’s) of Cincinnati, OH, and Middleweight Demond Nicholson (12-1, 12 KO’s) of Laurel, MD.
Taking part in 6-round bouts will former U.S. Olympian Raynell Williams (7-0, 4 KO’s).  Williams will fight in a lightweight bout scheduled for 6-rounds
Rounding out the card in a 4-round bout will be undefeated super middleweightChristopher Brooker (2-0, 2 KO’s) of Philadelphia.
Tickets are priced at $75 and & $50 and can be purchased atwww.stadiumboxing.eventbrite.com or by calling 610 587 5950
Tags:#boxingFarah EnnisFrank De AlbaKings PromotionPhillySteve Upsher