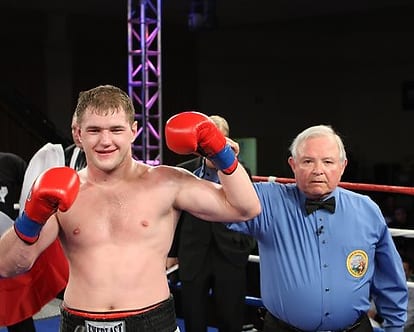 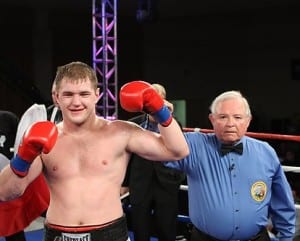 In the main event Andrey Fedosov (28-3 22KOs) defeated Donovan Dennis (12-1 10KOs) to become the heavyweight boxcino tournament champion to conclude the ESPN2 Friday Night Fights franchise which spanned over the last 17 years. Dennis gave Fedosov problems early in the fight with his legs and length as Dennis fought behind a jab. In the second round, Fedosov was able to close the distance and land solid work to the body that seemed to change Dennis’ temperament in the fight.

Dennis was floored by this work in the third round as Fedosov began to take control of the fight. Dennis never seemed to be able to adjust to the non-stop pressure of Fedosov who may have been raw, but just wouldn’t stop coming forward. Fedosov forced Dennis to take a knee once again in the seventh round.

It was a fateful right hand that ended up stopping Dennis in the eighth round as Dennis was sent to mat once more, but Dennis looked mentally beaten up as much as badly beaten. Simply put, Dennis wanted some relief from the annihilation he was a part of.

Fedosov who lost a fight to Bryant Jennings a few years ago which was stopped early due to a cut, could be a bout that might made in the future.It is also important to remember Fedosov has a style in which he brings the fight to his opponent which could entice some of the divisions big names to fight him since they feel they could beat him. An interesting bout in the future would be one with Tyson Fury.

John Thompson IV (17-1 6KOs) defied the odds as he beat tournament favorite Brandon Adams(17-2 12KOs) to become the boxcino junior middleweight tournament winner. Thompson who entered the tournament earlier this year on a day’s notice had an incredible journey to win the title that seems almost improbable in theory as he faced the three toughest foes in the tournament one after another.

In what might be a fight of the year candidate that only lasted two rounds that saw both fighters touch the canvas as Thompson was dropped in the first round only to rally back and stop Adams in the second round.

“…he was swinging for the sky and I went for it.” Thompson said after the fight as he reflected upon the knockout. Adams who seemed very confident that this would be his time to win the boxcino after coming up short last year against Willie Monroe Jr. saw his hopes fade as he got caught in a wild exchange that changed his mind state. Adams tried to recover , but appeared confused as to how to defend himself as he sat on the ropes and was dropped once again. Even on unsteady legs, Adams, the tournament favorite heading into the event was afforded one last chance as he was stopped in the corner.

For Thompson, this marks major redemption as he was viewed as a high level prospect before getting knocked out by Frank Galarza on ShoBox last year. Thompson now will be ranked in the top ten of at least one of the sanctioning bodies and could find himself against a champion sooner rather than later.

In the opening bout Isaac Zarate (10-1 1KO) won a dominate one sided decision over Fernando Fuentes (5-5 1KO) in a bout that it appeared that if Zarate had a bit more pop in his punch he could of stopped the less talented fighter, Fuentes.

Angel Martinez (6-1-1 2KOs) upset Andres Figueroa (5-1  3KOs) as he caught Figueroa with a check left hook in the sixth round dropped Figueroa, not long after Figueroa was stopped on the ropes.