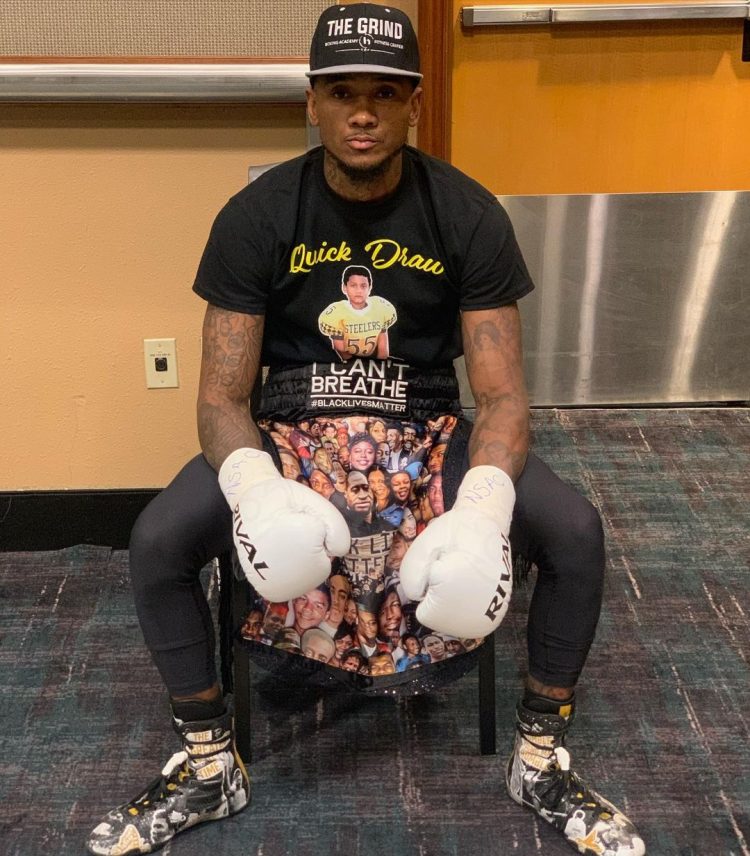 In one of my many clickbait articles leading into the new year, we will put the spotlight on guys who deserve the spotlight. This will focus on fighters who do not have a major promoter but are of the ilk that deserve to be invested in for their boxing career, to inevitably get a massive opportunity to see where they stand in the sport of boxing.

Below are the ten fighters I believe should be signed by a major promoter currently, even given an impending economic depression.

Quinton Randall is the best-unsigned fighter in the country currently, in my opinion. Winning international tournaments, and defeating good professional fighters such as Clay Collard, and Jan Carlos Rivera.

Yet, at 30-years-old with a record of 7-0, 2 knockouts, the age, and low KO percentage probably stand out more than his unique skillset, even though he has already had two eight-round fights, and could be a plug-and-play for a ten-round main event, right now, with no investment needed.

Randall has two quality wins, and a quality amateur pedigree with the only thing hurting him from the investment from a promoter being his age, meaning he might have to beat someone from the b-side to obtain a promoter.

Why he should get signed: Randall is good, very good. Beyond that, he already has a few eight-round bouts and should be in-line for a ten-round fight soon. On top of that, Randall is a great interview and has made it clear he wants to avenge his teammate Robert Redmond, Jr’s loss to Blair Cobbs, as that is a fight Randall deeply wants.

Russell, has a great team around him, starting with his coach/father Brian Russell, as well as has good given abilities most are not birthed with as Russell was a star quarterback in high school.

Why he should get signed: Russell has dynamics such as speed and power that you can only be born with, or gifted through years of playing sports. Someone who fit in and earned his respect with Mike Tyson during Tyson’s last camp should be looked at by every promoter, IMO.

It might be cheating as the 17-year-old Harris, I believe is with Ashton Slyve’s H20 Promotions, but until they get a distribution deal, i.e. a major network like DAZN, etc, to get behind their fights, I view them as under-the-radar still. Sylve shares the spot as they occupy a similar space to my perception of the world.

If I worked at any of the major promotional outlets the lightweight, Harris would be my top prospect currently to go after as he has good use of distance, the ability to close the show, and also has sparred world-level fighters like Gervtona Davis on top of what I mentioned. The youth movement of L.A. is coming with Ashton Slyve leading the way, but right now – I want my readers to pay attention to Harris, who has thoroughly impressed me so far, and the gyms are raving about his talents.

Sylve is your generational blue-chipper with a floor-to-ceiling list of amateur accomplishments, an intelligent father who is making moves in his son’s best interest, an investment in exclusive intellectual properties such as photos and videos, and the early investment into a promotional entity in H20 Promotions.

It is easy to talk about Sylve’s in-ring skills, but when speaking about Sylve, often currently it is the stuff outside of the ring that separates him, as he is working on putting in motion a plan far bigger than himself with goals of ownership of his career early on. The super bantamweight is a stud.

Why they should get signed: Both Harris and Sylve have the potential to be household names and speak to the youth being a part of that generation. When they both turn 18-years-old I expect to see them on the undercards of major shows, because of the ceiling they both have.

Katzourakis is a fierce middleweight who has spent much of the pandemic up in Big Bear Lake, Ca, with Abel Sanchez, looking to improve. The Greek fighter, who finds inspiration in the feats, Sanchez and Golovkin accomplished is looking to make his own history as well with the famed coach.

At 23-years-old, with a record of 6-0, 5 KOs, and already a six-round fighter, Katzourakis is a big puncher with a country behind him.

Why he should get signed: Katzourakis is a big puncher with a great story, a great interview, and has an entertaining team behind him. If nothing else Katzourakis’ career will be entertaining, and for most, they tune into the sport to be entertained.

“Pistol” Pete Dobson is 30-years-old, and 11-0 with 7 KOs, as you can see with this list, oftentimes age, not talent can be why a major promoter doesn’t invest in a fighter. Dobson, who is trained by one of my favorite trainers, Andre Rozier, looks to be a guy who will have to fight his way into respect, but for us, he has simply earned it already.

Dobson holds wins over two undefeated fighters, Jeremy Nichols and Emmanuel Medina, and fights tomorrow, which if all goes well will improve his record to 12-0.

Why should he be signed: Dobson is a solid fighter, and as his record states will fight anyone. Good fighters eager to take hard fights, and who maintain a good record, should inevitably get rewarded with a big fight or a contract that creates some form of job stability. Dobson has earned that if all things are fair.

The Madera brothers are the Diaz brothers of boxing, and both hail from Stockton, California.

Older brother, Quilisto Madera was at one-time signed to Top Rank Inc, and had a fight of the year contender with Joe Louie Lopez on Solo Boxeo, as well as Julio Celso Sanchez took a photo that won the BWAA award of the year for that year, of that bout. Madera is fun to talk to, a good fighter who has sparred Gennady Golovkin, Andre Ward, David Benavidez, and more, now is looking to make his statement on the sport, with the only downside being he has two losses.

Quilisto is one of my favorite fighters because like Nick and Nate Diaz you never know what will happen with his fights from the press conference to the weigh-in to the fight.

Ector Madera, Kilo’s younger brother, was a decorated amateur and is a brilliant boxer and violent puncher. Madera has respect in the gyms and sparred the best, and is an elite talent.

Why Should they be signed: The Madera brothers are entertainment. They sell the fight, they provide a good show, they get people interested. The sport of boxing is built around talent, and characters, and the Madera brothers have both.

Rashiem Jefferson, Jr., the son of Rashiem Jefferson, Sr, has been a fighter who greatly stood-out to me over the past year. To put it frankly, the guy is good – REALLY GOOD! The only thing working against him is he can box your socks off, but so far has yet to record a KO, though his first three fights were not against guys coming to lose either.

Jefferson is a master technician who is adapting to the pro game and I expect big things from in the future, but at only 19-years-old is growing, with tremendous talent.

Why Should he be signed: Jefferson should be signed, because is young, talented and a fighter who can compete with anyone at his age in the country. Jefferson was the guy for me in his division heading into the Olympic Trials, and with proper development, and investments I see him as a guy who could be in the upper-tier for a generation.

The runner-up at the Olympic Trials Antonio Mireles, Jeremiah Milton lost a Box-Off to Richard Torrez, Jr. to start the year, and turned pro earlier this year. Milton has since been in camp with Daniel Dubois, Joe Joyce, Luis Ortiz, amongst others gaining world-class experience

On top of all of that, Milton is a great person to be around, which doesn’t hurt at all for the 26-year-old.

Why Should he be signed: Let’s be honest outside of a few guys in the country, the amateur scene for heavyweights is bare, and it is one of the marquee divisions in the sport. Milton has experience in the amateurs, history with both Richard Torrez and Amisael Jimenez, both of whom will be around, and is easy to work with. I am hoping that the 2-0, 2 KO fighter from Oklahoma gets a promotional contract next year.

A nightmare for both broadcasters, and opponents alike, as his name is not the easiest for most, but his skill set is impressive. The 21-year-old has an awkward style using distance and range gauging with unusual movements, that have opponents off-balance and perplexed.

Llamido, won the nationals in two different weight divisions, which something to take note of, as that means he can really fight.

Why he should be signed: Llamido will make it to the next level if he stays focused on the sport of boxing, and continues on the path he is on. Llamido will be a player in this division five-to-six-years from now, and those willing to invest in him can see the fruits of their labor. It is also notable that on his own, he got three fights before enlisting manager Peter Kahn.

Abram Martinez is a solid guy in a stacked division, who can knock out anyone and at-times lets his pride get in the way of his game plan creating fun fights. The 26-year-old who is 8-0-1, with 6 knockouts, is a workhorse in the gym and a tone-setter.

Martinez always puts forth an honest camp, and is giving the sport his all – what more can you want?

Why he should be signed: Martinez is in a stacked division, 140 lbs, that has most of the stars of the sport, and Martinez being in with them could create iconic and dramatic moments. Martinez is also a tremendous interview – honestly, can some just sign him already – this one makes too much sense! 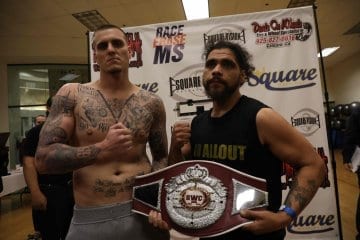